Drumstick spinning is something we all do whether it’s while we’re standing idly or playing in a live show. While showmanship isn’t something you should put all your focus on if you’re learning the drums, spinning drumsticks is a useful skill in certain situations.

We’re going to look through a few drumstick tricks. I’ll explain how to do them as well as give you a brief overview of how difficult each one is to learn. Make sure that you have a stick with you while reading this! 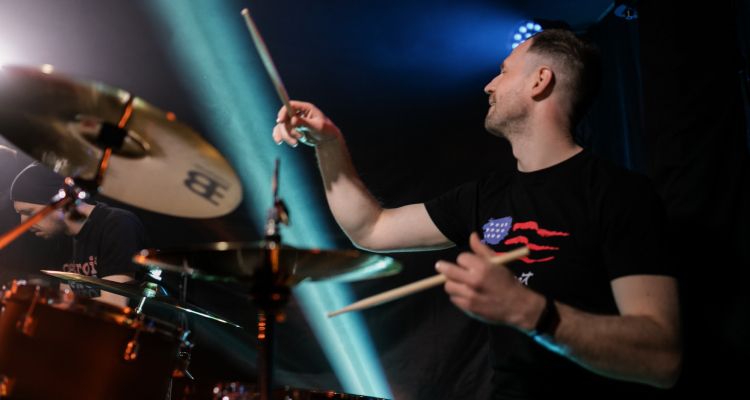 Before we get to the drumsticks tricks, it’s important that you know what showmanship is and how you can approach it responsibly as a drummer.

If you’re a beginner drummer, I wouldn’t advise putting much time into learning how to spin a drumstick. You should focus on learning essential drumming techniques.

The only big platform for drumstick spinning to be effective is live shows. If you play in a band and you need to add a bit of excitement and flair to your drumming image, showmanship is very important in this regard.

Remember that most people watching you play don’t know much about drumming, so they base their feelings more on what they see rather than what they hear. Many people who aren’t musicians will be more impressed by you spinning your sticks within a groove than they would if you were to play a killer drum fill.

5 Stick Tricks to Please the Crowd

The easiest stick trick to learn is a simple backward toss. It doesn’t take long to learn, and you’ll find that you’ll nail the flip every single time after a while of doing it. The two types of flips are a half toss and a full one.

To do the half flip, you need to place your hand near the bottom of the stick. The further you have your hand down the stick, the easier it will be to flip thanks to the weight leverage. Flip the stick up and catch it once it has rotated 180 degrees.

The half flip is a great way of changing the stick over to the opposite side so that you get a different playing surface. For example, it sounds fuller when you play a cross-stick with the back of a stick. Doing a quick half flip will get you to that position in the middle of a song.

A full flip would be when you flip the stick completely in the air and catch it in the same position that you threw it from. This one is a bit more difficult as you need to get more height on the throw.

However, this stick trick is easier to fit within grooves as the forward motion from the stick makes it easier to play a drum or cymbal once you’ve caught it.

To do the trick, you need to toss it in the air by pulling your arm toward your body. This motion will propel the stick forward. You then need to catch it as it lands in the same position that you threw it from.

This stick trick looks incredible when you nail it on a stage, especially when you do it within a groove or fill.

The fake twirl is one of the oldest and most popular stick tricks in the book. You will see drummers on stages doing this one very regularly. It’s a great trick as it gives the appearance that you’re spinning the stick between your fingers. However, it’s staying in one place, making it easier to pull off.

You do it by keeping the stick between your middle and pointer finger. You then do a scissor motion to move the stick around. You can either move it forward or backward. Once you get used to moving it around, you can start moving it faster. The faster it moves, the more it will look like the stick is spinning in a circle.

This is a great trick as you can do it continuously without stopping. Just don’t do it for too long as it will look like you’re desperately trying to get the crowd’s attention!

The back twirl is a trick that is heavily used in drumlines. When it comes to playing on a drum set, it’s a fantastic trick to pull out when you’re hitting cymbals. You can hit a cymbal as the stick flips, giving you a huge finish.

To pull this trick off, you need to hold the stick between your thumb and pointer finger. Start working on the motion of flipping it backward from that starting point while keeping your fingers and the stick in the same position.

You’ll find that you need to do a bit of a dip with your hand in order to get backward momentum from the drumstick.

Once you get used to the motion, increase the speed that you’re doing it. The quicker you do the back twirl, the better it looks. It’ll eventually be a quick flick of the wrist and the stick will look like it did a quick 360-degree turn.

Around the Back Toss

While the other stick tricks were somewhat practical, this last one is purely to impress your friends. I wouldn’t suggest pulling this out at your next corporate pop gig. It’s just a lot of fun to try in your practice room.

You’re going to need to be quite good at catching drum sticks as this trick will have you throwing one behind your back and over your shoulder. That’s all there is to it, but the key is nailing the trick while playing a groove.

If you get comfortable with throwing the stick and catching it behind the matching shoulder, you can try catch behind your opposite shoulder for more of a challenge. Just have fun with this one. You probably won’t be using it at any major gigs!

Here’s a clip of Chip Ritter nailing the trick near the beginning of this drum solo. He’s known for being great at stick tricks, so it looks incredibly natural for him to nail this particular one. If you want to get even more unnecessary with stick tricks, you can try to learn to juggle the sticks as he does.

Remember to learn all your drum parts thoroughly for a gig before attempting to do stick tricks within them. It’s more important for your band that you sound good and keep everyone together than it is for you to pull out some stick tricks.

Showmanship should always come second after musicianship. Once you’ve got that down, you can pull out the tricks. I’d suggest you only learn a few of these instead of all of them. That will allow you to focus on perfecting the few that you’ve chosen, leaving less room for error when you pull them out at a gig.