The majority of drummers are right-handed and tend to set their drum kits up in the same way. Most drummers can hop from one kit to the next, without having much trouble adjusting to the slight differences. However, this isn’t necessarily true for left-handed drummers!

With about 10% of the people in the world being left-handed, you’ll find a few lefties playing the drums.  There may be more left-handed drummers in the world than you think, though. They just don’t all exclusively play on left-hand drum setups.

Differences Between Right and Left-Handed Drumming 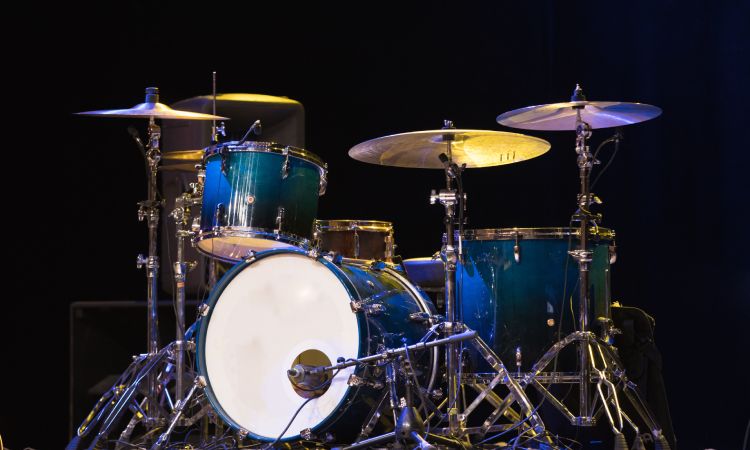 The main difference between right and left-handed drumming is that drum kit setups are mirrored versions of each other. This means that all the parts of the drum kit are swapped around, like in the image above.

Instead of the snare drum being on the left side, it sits on the right. The same goes for the hi-hat, ride cymbal, and floor tom. Most left-handed drum sets also have the rack toms switched around.

The majority of drummers in the world play with right-hand setups, so it’s not very common to see a left-handed drummer playing on a mirrored kit. However, you should put yourself in the shoes of a left-handed person to realize how comfortable a mirrored setup might be for them.

They don’t need to purchase any additional equipment. Most drums and drum accessories are usable by both types of dominant hands. However, a left-handed drummer may run into a few issues with a double kick pedal if they play on a mirrored setup.

They’d just need to make sure that the pedal can be set up in a reversed way. Some pedals can’t, so left-handed drummers need to be aware of that.

The main benefit of playing a left-handed drum setup is that it will be comfortable for anyone who uses their left hand to do everything. The hi-hat is typically where your dominant hand spends the most time when drumming, so having it on the right side of the kit will make playing a bit easier for drummers with dominant left hands.

The same can be said for the kick pedal. Lefties usually have a dominant left foot as well, so they’ll be able to get more force behind their strokes when the bass drum is on their left side.

This isn’t a definite rule, though. All drummers are unique, and some have a dominant right foot along with a dominant left hand. With that being said, playing the drums from right to left will always be easier for a left-hand dominant person, especially in the learning phases of drumming.

The biggest con of left-handed drumming is the fact that most drummers play with right-handed setups. This means that a left-handed drummer will always struggle to play on other drummer’s kits if he’s used to playing a mirrored setup.

Imagine a drummer showing up to a jam session and stopping the show for 5 minutes so that he can switch all the drums around. That’s the struggle that left-handed drummers are regularly faced with. The same thing happens in a teaching studio if the teacher only has one drum set.

So, left-handed drumming is perfect when you’re playing on your own drum set, but it’s a struggle when you need to play on someone else’s.

The other downside is that most drum lesson material teaches as if the student was right-handed. Lefties are constantly faced with the task of reversing the sticking around before they learn to play patterns.

They end up getting quite good at this, but it’s a confusing task when they first start learning to play the drums.

Is Playing Open Handed a Better Alternative for Left-Handed Drummers?

The downsides of left-handed drum setups are often enough to prevent people from playing on left-hand drum setups. Open-handed drumming is often another way of playing that lefties gravitate towards. This is when a drummer opens up his arms to play the hi-hat and snare, instead of crossing them over each other.

The idea with open-handed drumming is that you get the best of both worlds. You get to lead on the hi-hat with your dominant left hand, and you’ll have no problem playing on other drummer’s right-handed setups.

A great thing about open-handed drumming is that it unlocks the ability to play a few patterns that would be much harder to play if your arms were crossed over each other. You can play the toms more freely within grooves as you won’t need to attempt navigating your snare drum arm underneath your hi-hat arm.

The downside of open-handed playing is that a lefty may not be playing the bass drum with their dominant foot.

There are quite a few things in life that aren’t designed with left-handed people in mind. Lefties are quite accustomed to adapting as best they can to things. However, you shouldn’t be chased away from playing how you want if you’re a left-handed drummer.

If playing on a mirrored kit is the most comfortable way of drumming for you, that’s what you should stick to. You’ll get the best out of your drumming and feel most at home. The more comfortable you feel at the drum set, the better your playing will be. A drummer should choose which setup to play after establishing which way will be most comfortable.

With that being said, you’ll just need to know that playing on other people’s drum setups will always be challenging. If you want to freely jam on any setup, you should learn to either play open-handed or right-handed.

If you’re a beginner drummer who is left-handed, you should try play a few basic beats in every configuration. You may just find out that it’s just as uncomfortable to play right-handed as it is left-handed at first. In that case, it would be very beneficial to continue learning on a right-handed setup.

It’s often hard to relate to a drummer who has a different setup than you. Beginner drummers typically get a bit confused when watching pro drummers playing with match grip. So, imagine how lefties feel when they watch most of the drumming world play on right-handed setups.

Any lefty out there should know that there are several accomplished left-handed drummers who have been playing on the biggest stages in the world for years.

The most famous of these would arguably be Phil Collins. He doesn’t play much anymore due to back issues, but he was rocking a left-handed drum setup in all his years of drumming for Genesis.

Another popular drummer from that time who played a left-handed drum setup was Ian Paice. He was the drummer for Deep Purple.

When thinking of modern drummers, many lefties prefer to play open-handed. Some notable names would be Simon Phillips, Robert ‘Sput’ Searight, and Billy Cobham. All these drummers play on right-handed setups but keep their hands open to lead with their left hands.

Left-handedness often poses issues for drum teachers as well as students. If you’re teaching in a space that only has one kit, you’ll need to shift the kit around to cater to your student who’s a lefty. It then becomes a bit more challenging to teach as you need to think in the reverse when it comes to patterns.

A popular option for drum teachers is to make beginners play on a right-handed set even though they’re left-handed. While this may seem a bit cruel, most beginner drummers feel awkward at the kit no matter which hand is dominant. So, lefties will typically adapt just as quickly as right-handed beginners will.

If you find a student struggling to adapt to a right-handed setup, you could teach him to play open-handed.

You should use your discretion, though, and always have the best interests of the student in mind when you’re teaching.

If you’re a left-handed drummer who is likely to play on other drummer’s kits, it would be massively beneficial to learn how to play open-handed. The great thing about playing open-handed is that you still get to lead with your left hand, so lefties typically feel quite comfortable playing like this.

Drummers who want to play on left-hand drummer setups will just need to accept the responsibility of moving kits around whenever they play on them.