In Western music, the drums and piano are used across a wide range of genres and styles. There are some very obvious differences between the two instruments, most notably the way they sound.

To decide which instrument to learn, it’s essential to understand how pianos and drums differ. You can then figure out which is better suited to your interests and your current level of musical ability.

In this article, we’ll explore the various aspects of drums and pianos so that you have a clear understanding of these two instruments.

Differences Between Drums and Piano

Drums and piano share some similarities, but on the whole, these two instruments are noticeably different. You may be surprised to discover that drums and pianos technically belong to the percussion family of instruments.

Percussion instruments generate a sound when they are hit, scraped, or shaken. Piano and drums are struck with another object, which is why they belong to the same instrument category.

We’ll explore more of the similarities later in this article, but first, let’s examine the main differences.

Differences in How Pianos and Drums are Played 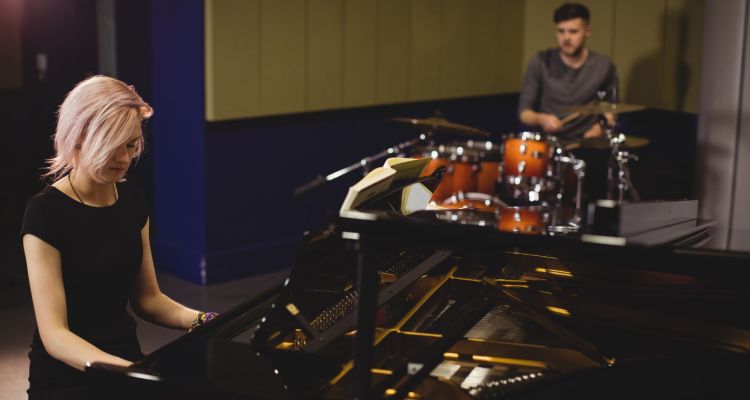 Despite being percussion instruments, the piano and the drums are played using vastly different techniques.

A piano is played predominantly using the fingers. Pianists must develop skills to simultaneously use their fingers to play bass notes, chords, and melodies.

Without guidance, learning piano can be difficult, particularly if you’ve got limited experience. Thankfully, there are some great platforms out there that can help you to improve at a faster pace, such as the excellent Simply Piano.

Dexterity is essential for pianists, allowing them to use their fingers and thumbs to play different notes and patterns.

Most finger movements used by a pianist involve engaging muscles in the hands, forearms, triceps, and biceps.

To play the piano to a high standard, a musician must also be able to use their feet. Pianos have several pedals, which add sustain and dampen the sound. Using these pedals is not as complicated as using the pedals involved in playing drums.

Playing the drums requires you to use all four limbs simultaneously. The conventional technique involves using the dominant hand to play the hi-hat, with the weaker hand positioned underneath to play the snare.

The drummer’s dominant leg is used to play the kick drum, via the bass drum pedal with a beater attached to it. The other leg controls the hi-hat stand so that the two cymbals can be opened or closed to create different sounds.

Coordination is a vital skill to develop when learning to play the drums. Initially, separating the movements of each arm and leg is different, but with practice, this becomes second nature.

This makes it possible to play melodies on a piano or multiple notes at once to create chords. A drum set is used more for rhythmic purposes rather than for creating melodies or chords.

The main aim of a drummer is to play a rhythm, beat, or groove, which the other instruments in an ensemble use as a reference for timing.

An understanding of time signatures and tempos is vital for a drummer. They must be able to keep a steady pulse so that the other musicians can easily stay in time with them.

Although rhythm is an essential aspect of piano playing, having knowledge of harmony is also integral, as the piano is a pitched instrument.

The pianist must develop their musical ear so that they can understand scales, keys, and intervals when playing.

The Pros of Playing Piano 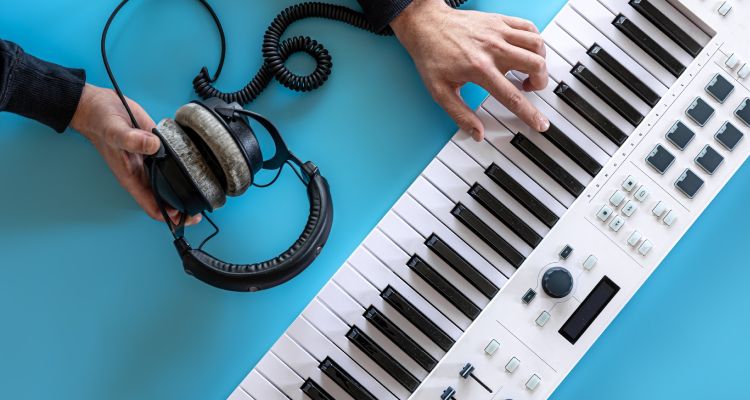 Piano and drums are two instruments that can be highly fun and rewarding to learn. However, they both have pros and cons that may influence your decision.

Let’s analyze some of the main advantages of playing the piano over the drums.

Digital pianos and keyboards allow you to learn to play while using headphones or the speaker volumes to a low level. This is a considerable advantage over drums, as you can play for as long as you like without risking disturbing anyone nearby.

Using an acoustic piano will make a considerable among of noise, but it isn’t likely to be louder than an acoustic drum set.

You can also access a wide range of different sounds and presets when using a digital piano.

Even full-sized 88-key keyboards are significantly easier to store away or move from one location to another than a drum set, which takes up a lot of space. This is because the drum set is made up of many different individual drums and cymbals, and then there are all of the stands and pedals too.

Using a carry case makes it very easy to transport a digital piano to your rehearsal space, gig venue, or recording studio. You can also get versions with fewer keys that are even more conveniently sized.

Transporting drums is more difficult, and you’ll need a van or a car to transport an entire drum set. However, you can manage to travel to gigs or rehearsals via public transport such as bus or train if you are only required to bring breakables such as drumsticks, cymbals, and a bass drum pedal.

Pianists must develop their knowledge of music theory alongside their physical techniques. The piano is arguably the best instrument for learning music theory and training your musical ear.

On the other hand, drums teach you more about rhythm and time than they do about harmony, notes, chords, and keys.

Learning the piano will have a knock-on effect, making you a better singer and improviser and making it easier to learn how to play other pitched instruments in the future.

An obvious advantage of playing piano over drums is that you can compose full pieces that include chords and melodies. You can also add vocal melodies and lyrics to create songs.

Most keyboards have the ability to record your musical ideas so that you can revisit them later. You can also often loop a section, then play over the top of it, which is very useful for songwriting.

Although some drummers perform alone, most of the time, the drums are used to accompany other instruments. A piano, on the other hand, can be used for a solo performance.

It’s common for pianists also to sing while playing, and because of the rich tonality of the piano, it’s possible to play in a wide range of musical styles.

The stripped-back sound of a piano and vocals lets you really hear the finer details of a song and gives it a totally new feel and sound.

The Pros of Playing Drums 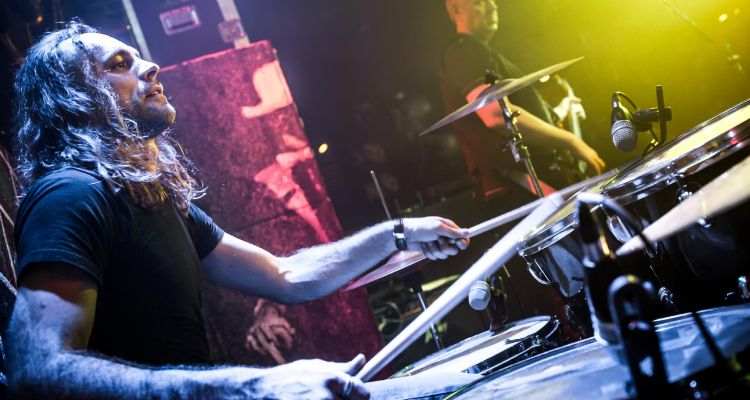 Now that we’ve gone through the advantages of playing the piano, let’s look at some of the arguments for learning to play drums instead.

Although it takes thousands of hours to reach a high level on the drums, it’s possible to learn the basics in a relatively short time. The piano is arguably harder to learn than the drums, particularly in the beginning.

Drummers can choose to focus on a specific playing style and practice the different beats and rhythms relevant to that style. Within a matter of weeks, your timing and technique can be developed to a high level.

Practicing rudiments and different techniques every day will lead to you seeing lots of progress in a relatively short time.

As anyone who has started a band will likely know, drummers are quite hard to find. Most musicians learn the guitar or piano, as these instruments are less noisy and easier to practice at home.

Learning the drums will probably lead to your skills being in high demand, and you’ll have no problems finding a band to play with or session work once you reach a high skill level.

Both pianists and drummers can earn an income playing their instrument, but the shortage of drummers means that it’s probably going to be easier to get your name out there.

Learning music theory and how to read drum notation can be highly beneficial, but it’s not essential. You can become an accomplished drummer playing and learning material by ear, but on the piano, knowledge of theory is more important.

Many of the most influential drummers never learned any music theory, but most world-renowned pianists require this skill to sight-read pieces.

Drum notation is much easier to follow than sheet music used for pianos. Once you understand what the various symbols mean, you can play along to drum notation after a short time.