Open-handed drumming is something that has been around for decades, but it has started getting a lot of attention in recent times. This is mainly due to several modern drummers playing open-handed and arguing the point that it’s the better way of playing.

In this guide, we’re going to look at every aspect of open-handed drumming. I’ll explain the benefits, how to set up a drum kit for it, and I’ll also list a few open handed drummers to check out.

What is Open-Handed Drumming?

If you’re an open hand drummer, it means that you don’t cross your arms when playing the kit. Instead of holding your right hand over your left to play the hi-hat, you keep your left hand at the hi-hat while playing the snare with your right.

It also means that your right hand moves around the kit, and your left hand stays around the snare drum, crash cymbal, and hi-hat area. That’s not a strict rule, but that’s what generally happens.

Open-handed drumming isn’t very popular, as most of us were taught to cross our hands to play the hi-hat. However, there are several benefits to playing like this, and more drummers are making the switch to open-handed playing every day. 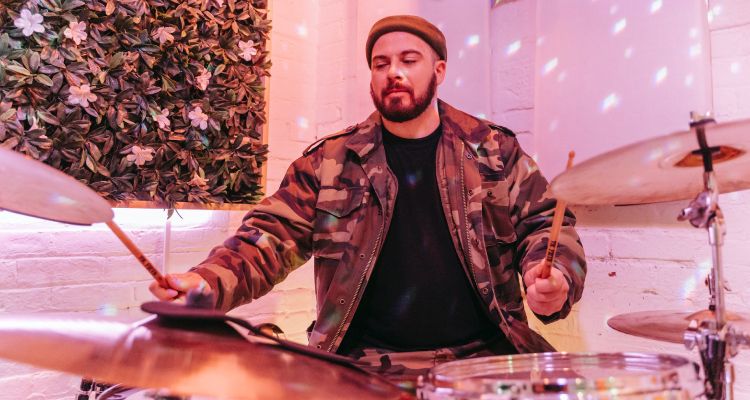 Freedom Around the Kit

One of the biggest advantages of playing open-handed is that you get more reach around the kit. Your dominant hand isn’t bound to the hi-hat to play grooves, so you can fit in different drums within grooves to make some interesting sounds.

You’ll find that open-handed drummers sound slightly different from drummers who play with a cross-arm stance. That’s because they’re able to play things that those drummers can’t, and those concepts are refreshing to hear.

For example, you can keep the rhythm on the hi-hats going while playing a drum fill with your right hand at the same time.

Another major benefit to open-handed drumming is that it allows left-handed people to play on drum sets that are set up for right-handers.

Every single house drum set at a venue is set up for right-handed drummers, so drummers who play left-handed have this big frustration of not being able to play comfortably on the set. If they play open-handed, which will have them leading with their dominant hand, things will be much easier.

Most left-handed drummers are encouraged to learn to play open-handed when they first start on the drums because of this. It just makes life so much easier if you decide to play gigs and sit in on jam sessions.

How Do You Play Open Handed Drums? 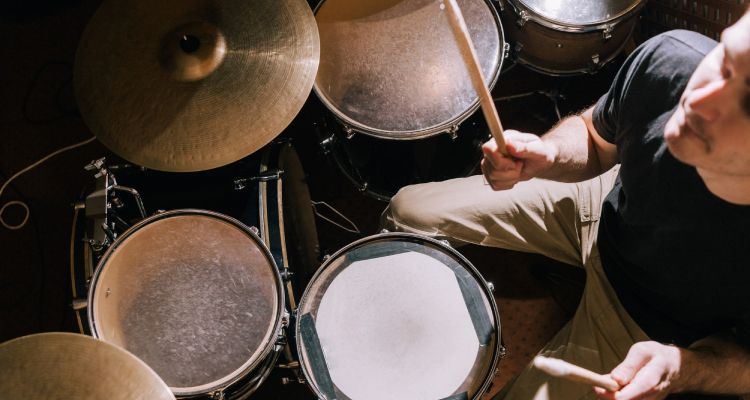 If you play drums open-handed, you can just set your kit up the same way you would with a right-handed setup. You’d just keep your hands open instead of crossing them while playing.

However, there are a few small adjustments to make that will make things easier. Firstly, open-handed drummers typically set their hi-hats a bit lower than closed-handed drummers do. This makes it more comfortable to play the hi-hat in different ways with your left hand.

If you’re a left-handed drummer who plays open-handed, you can also place your ride cymbal to the left of the kit instead of the right. That will allow you to play the ride with your left hand. Open-handed drummers who are right-handed typically just leave the ride in the same spot as usual.

Lead with Your Left Hand

The biggest adjustment to make when switching to open-handed drumming is that you need to lead most grooves and fills with your left hand. This may take a while to get used to, but it’s the best way of catering to keeping your left hand on the hi-hat for grooves.

If you lead with your right hand on a fill, you’ll end up playing your left hand twice in a row after crashing, and that won’t be possible at high speeds.

Some grooves and fills will sound quite cool when leading with your right, but the general rule of thumb is to lead with your left with an open-hand setup. 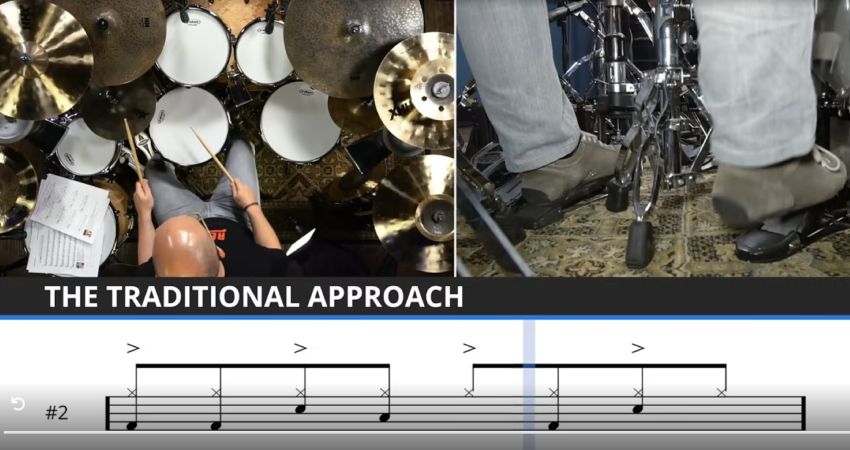 Claus Hessler Hessler has released publications on open-handed drumming and has played with artists such as Mike Stern, Herb Ellis, Randy Brecker, Ack van Rooyen, Matt Smith, and many more.

In this comprehensive course, Claus Hessler teaches the open-handed drumming concept and how it can be applied to orchestrations, rudiments, and linear drumming to open up a whole new world of creative possibilities. 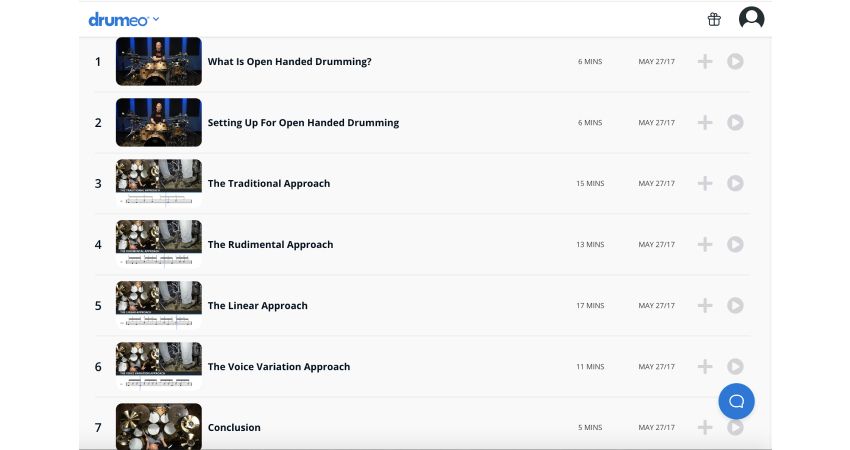 The course is 80 minutes long in total and covers everything to enable you to improve your open-handed drumming.

You can gain immediate access to this course by signing up for a free 30-day trial to Drumeo, which gives you access to not only this course but thousands of professional quality lessons and hundreds of courses just like this.

Drumeo is hands-down the best drumming educational platform that can help you improve in all aspects of your playing. Sign up for free now using the link below.

Many people used to think open-hand drumming was wrong simply because we all got taught to cross our arms with drumming.

Open-hand drumming isn’t bad at all. It’s actually the better way of playing for many drummers.

You open yourself up to more playing potential around the drums, and a lot of people argue that playing with your arms open is better in terms of ergonomics.

Dennis Chambers even stated that he realized that he’d been playing drums wrong his whole life and wished he had learned to play open-handed when he first started.

If you’re someone who loves learning from books, you’re not going to find any that are geared toward open-handed drummers.

Most educational content is created with right-handed drummers in mind. That means all the fills and grooves that you may learn will be notated with the right hand leading.

If you want to apply that to your open-handed setup, you’ll need to switch the hands around in your head while reading the notation. That can get very confusing at times. Both left-handed and open-handed drummers will have this problem.

Relating to Drummers May Be Difficult

If you’re a visual learner who loves taking in what other drummers are playing, you have a very small pool of professional drummers to watch that play open-handed. It can be difficult to relate to drummers who play cross-handed simply because you play differently from them.

This isn’t a major issue, as not too many people struggle with it. However, it can be another frustration, similar to matched grip drummers not relating to traditional grip drummers.

You’ll need to shift things around to fit your playing style, and that can potentially be frustrating.

It’s not a huge thing, as everyone adjusts drum kits to fit their preferences before playing, but it’s worth mentioning.

Billy Cobham was one of the first popular open-handed drummers. He’s a highly inspirational drummer who’s played with some of the best musicians to ever live, such as Miles Davis, James Brown, Quincy Jones, and Sonny Rollins.

While he’s well-known for playing open-handed, he also has a big double bass drum setup, which isn’t very common in the jazz world.

Justin Bieber is a bit of a weird addition to this list, as he’s not famous for his drumming skills. However, there was a big controversy over the way he played drums when there were videos circulating of him playing drum solos.

This was simply because he was playing open-handed, and a lot of people perceived it as the wrong way of playing at the time.

Carter Beauford is most well-known for his role as the drummer in The Dave Matthews Band, and he’s one of the biggest inspirations to open-handed drummers.

He’s completely ambidextrous, and he puts that to good use in his drumming.

Harry Miree has a highly unique drum kit setup. He’s a right-handed player, but he uses a left-handed setup to allow him to play open-handed. He even uses his right leg to play the slave pedal of a double bass drum pedal, and he uses a hydraulic pedal with his left foot for the hi-hat.

His setup allows any right-handed person to play open-handed without having to change the way they play. He’s a big believer in open-handed drumming being the superior way to play, and that’s why he sets his kit up as he does.

Robert ‘Sput’ Searight is one of the busiest working drummers at the moment. He has an iconic open-handed playing style, and his most notable gig is with Snarky Puppy.

He’s another drummer who is left-handed that decided to utilize an open-handed playing style instead of switching the kit around.

Here’s a basic rock groove, but your goal will be to play it with an open-handed stance. So, keep your left hand on the hi-hat and your right hand at the snare drum.

This groove will help you understand how your right hand can move around while you keep a groove going. If you were to play this in a close-handed position, it would be quite uncomfortable.

If you’ve moved your ride cymbal to your left side to play open-handed, this groove will help you get used to playing it in that position.

If you’ve started playing open-handed, ghost notes are going to feel a bit weird to play. This groove will act as a starting point to work on getting those ghost notes to feel comfortable.

This last groove is a bit challenging, but it will help you develop the flow between your hands when playing open-handed. You’ll play the first snare drum note with your right hand, but you’ll need to play the second one with your left.

Open-handed drumming is arguably the best way for left-handed drummers to play the kit so that they don’t need to move things around much when playing on other people’s kits.

However, it’s also a great way of playing for right-handed drummers. Using an open-handed stance opens you up to new playing ideas, and it prevents the potential to hit your arms together when trying to play certain things.

A lot of drummers wish they started playing open-handed from the beginning of their drumming journeys, while other drummers are perfectly happy with their close-handed style.

It’s mainly a preference thing, so you should try playing open-handed to see if it feels better for you. If it doesn’t, there’s nothing wrong with crossing your arms when drumming. 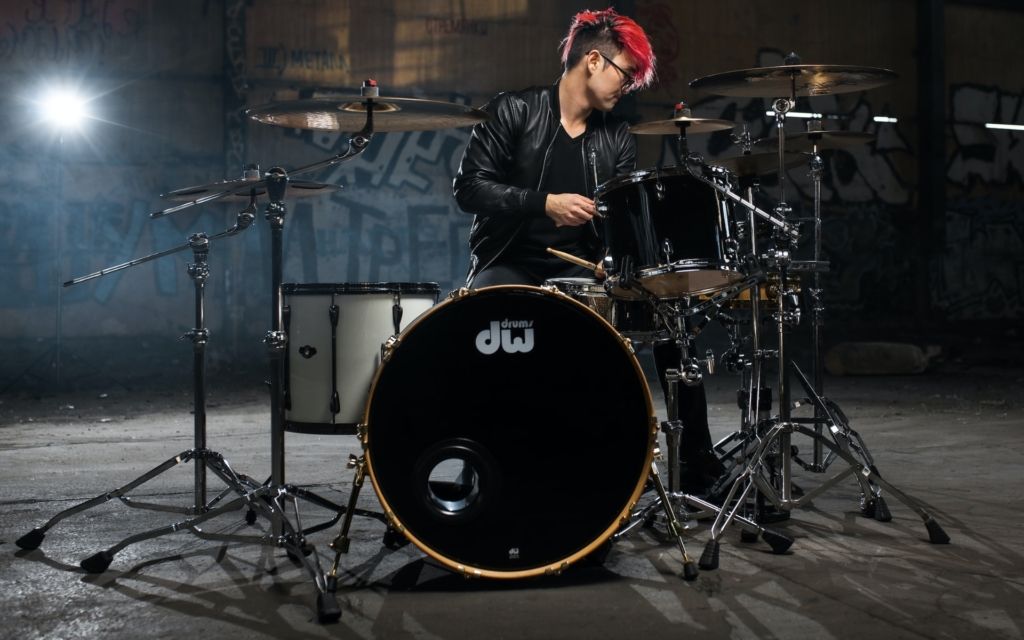 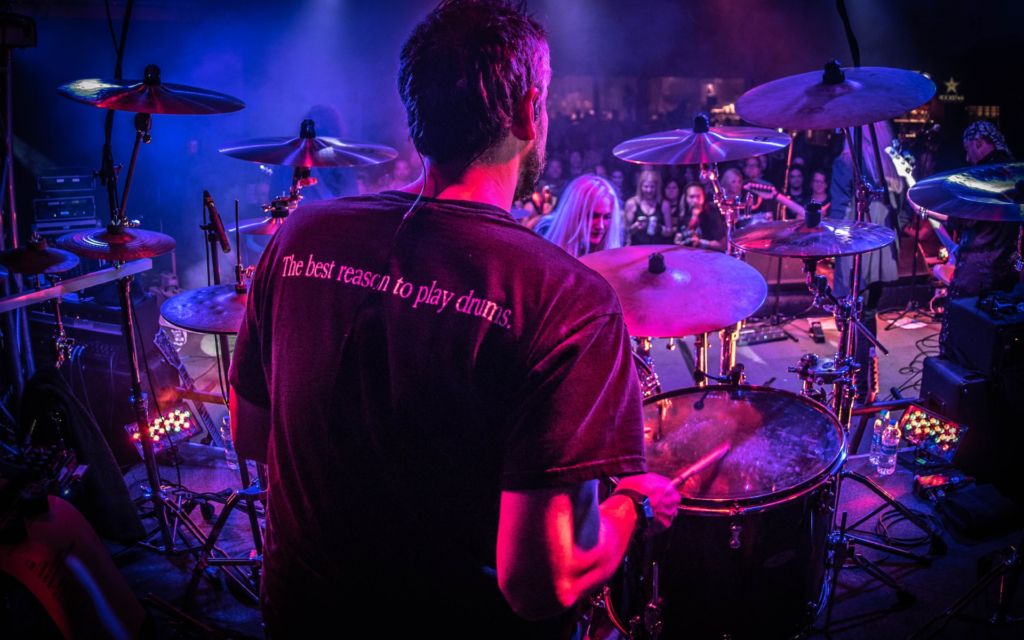 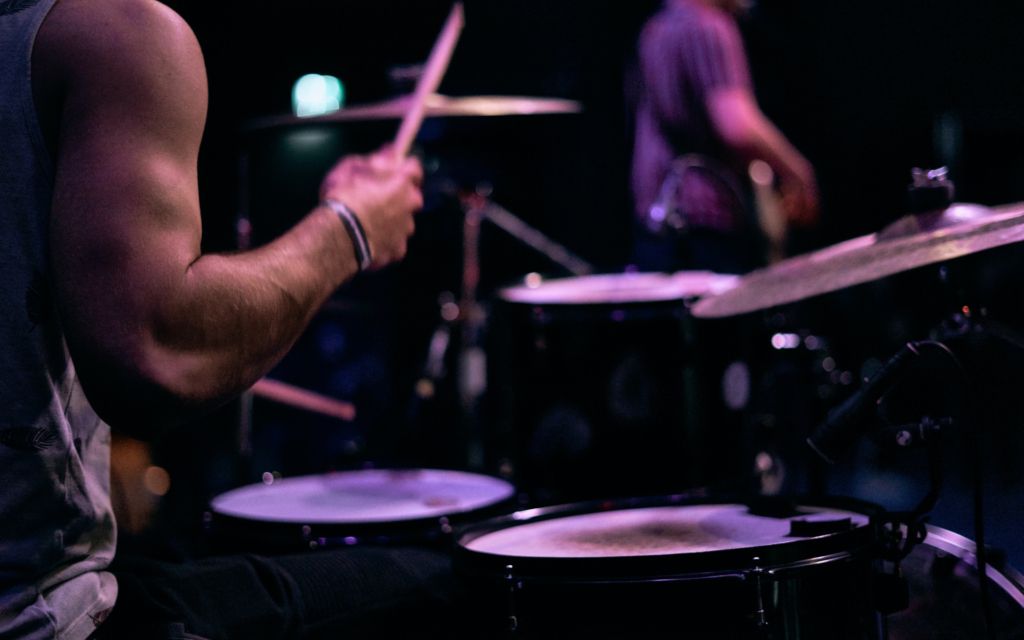 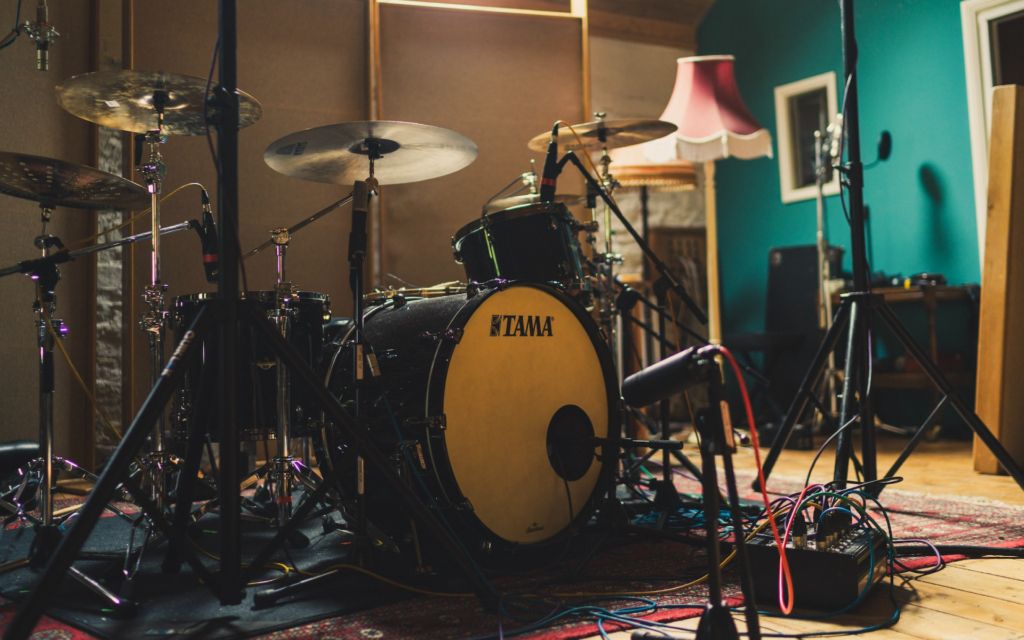 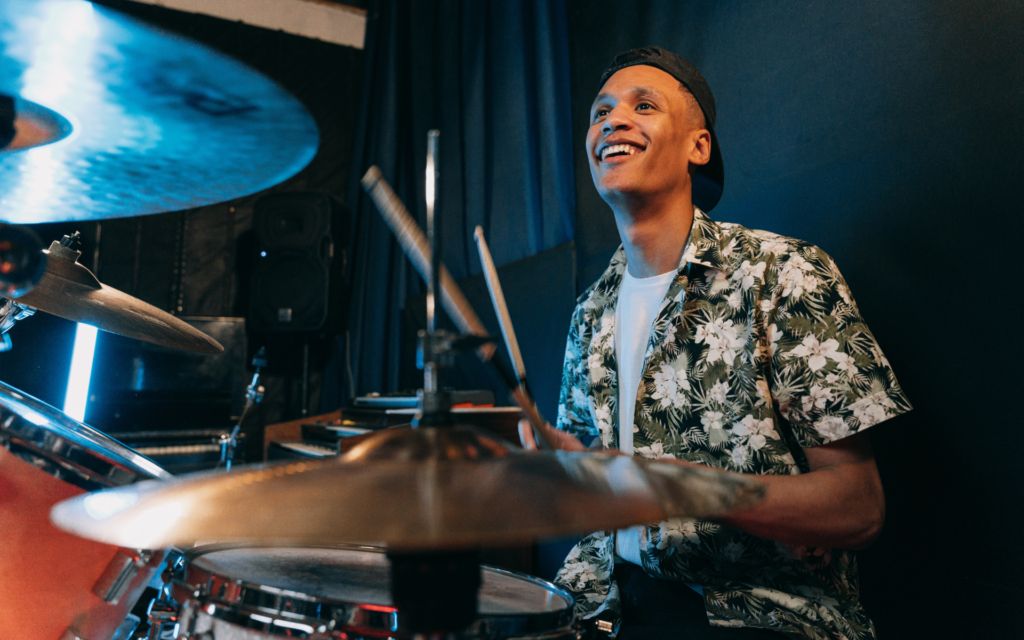 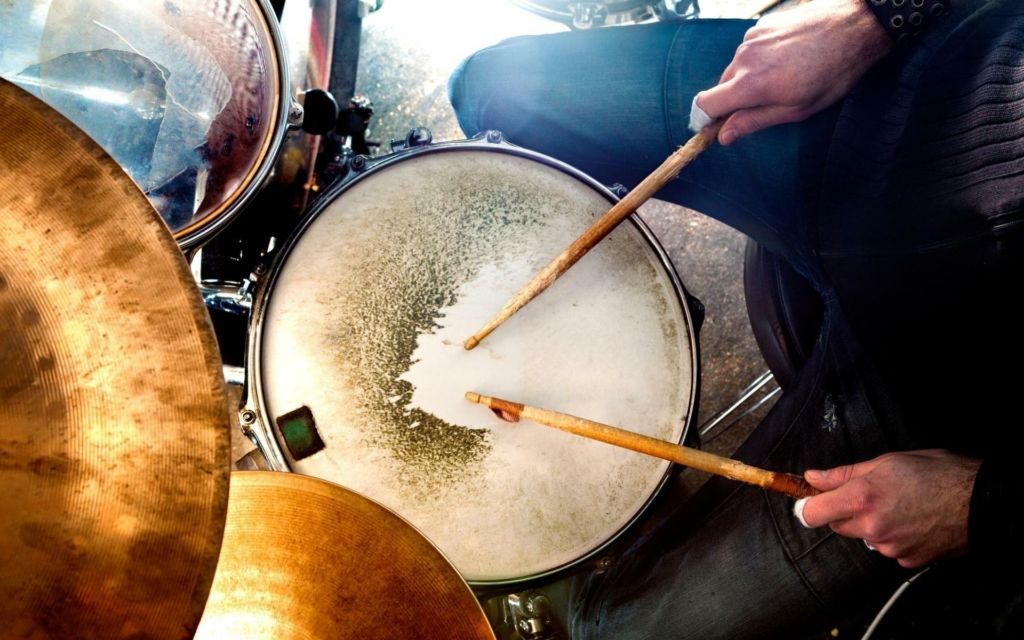