If you’ve ever watched the movie, Drumline, you would have seen a top-quality marching band in action. While marching bands are most popular in the USA, you can find spots here and there around the world where marching bands perform.

In this article, we’re going to look at the percussion section in a marching band. It has multiple members, all playing different percussive instruments. Marching band drums are a bit different from standard drum sets, so we’ll look at how they’re different, how to play them, and see what sounds they make.

What is a Marching Band?

Before we get there, let’s first be clear on what a marching band is. A marching band has dozens of members that play music while marching. You can find them performing at parades and sports events. When the bands play at sports events, they typically do march routines that are a spectacle to watch.

A band will have up dozens of marching drummers with multiple members playing each marching band drum.

You get different-sized marching bands. Some are small while others can have hundreds of musicians playing in them.

The percussion section in a marching band has several different types of drums. Typically, percussionists specialize in playing one of them as each of them has a bit of a different learning curve.

Here is a list of the types of drums in marching bands:

The marching snare is one of the most recognizable drumline instruments. They’re typically tuned a lot tighter than snare drums from acoustic drum sets. This gives them a distinct high-pitched sound.

The snare drum parts in marching songs are always the most intense and challenging. Snare drummers need to have excellent command over rudimental playing, and their technique needs to be brilliant to keep up with the intensity.

Snare drummers are also often the ones that do all the stick tricks in a drum line. Musicians playing the other drums do some tricks as well, but never as many. 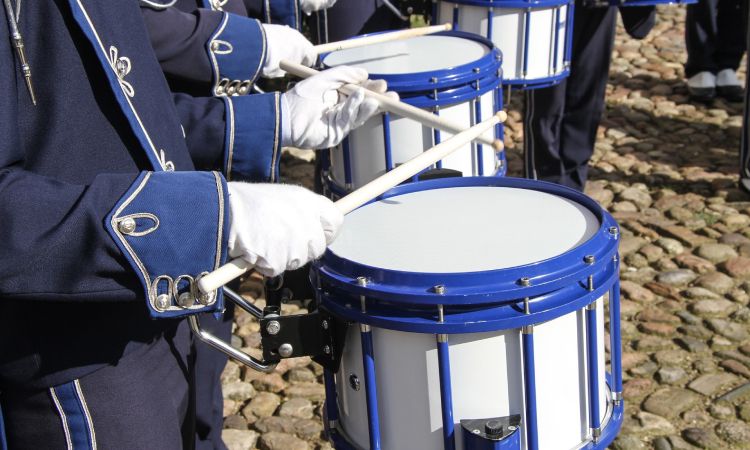 The bass drum is the next easily recognizable drum in a drumline. Bass drums in marching bands also have harnesses that position the drums at the player’s chest and stomach.

They’re a bit lighter than bass drums on an acoustic drum set, but they produce a very similar sound. The only difference is that the tones are slightly thinner as the drums rarely use muffling. Bass drummers also often play rim clicks by hitting the edges of the bass drums.

Most marching bands will have multiple players carrying different-sized bass drums to get some tonal variety. This is where the bass drums differ from marching snare drums as all marching snares in a band will be the same size most of the time.

A bass drum player will use mallets to strike the bass drum on both sides. People who play bass drums in marching bands need to be extra fit as they hold a heavy drum up for extended periods. 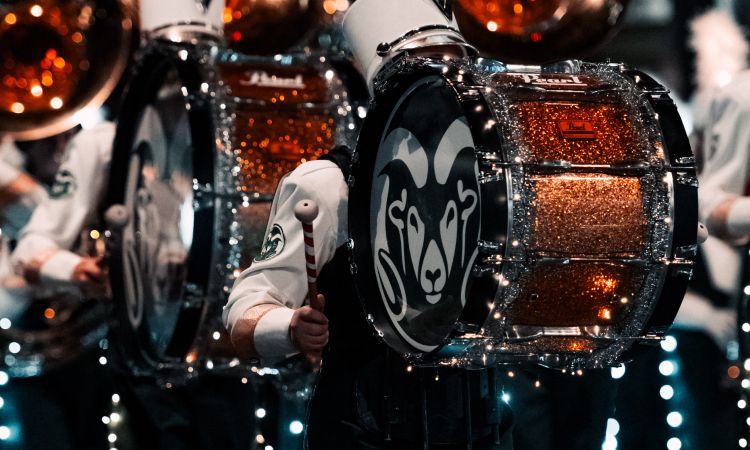 The tenor drums may be the most unique drums to you if you’re used to playing acoustic drum sets. These marching band drums are also referred to as quad drums sometimes. A set of tenor drums will have 4 drums that vary in size along with a smaller drum that provides a high-pitched cutting sound.

Similar to marching snare drums, tenor drums are tuned very high so that the sounds pierce through the rest of the ensemble. The difference is that you get multiple tonal options with tenor drums. Drummers will also play them using matched grip.

Tenor drummers will often play patterns and do crossovers with their hands as it looks impressive from the crowd’s perspective. Marching bands put a heavy focus on visuals, so things like this are important when they play.

The four main drums are 10”, 12”, 13”, and 14”. The small effects drum closest to the player is usually around 6”. Marching drummers will often call that drum the gock. 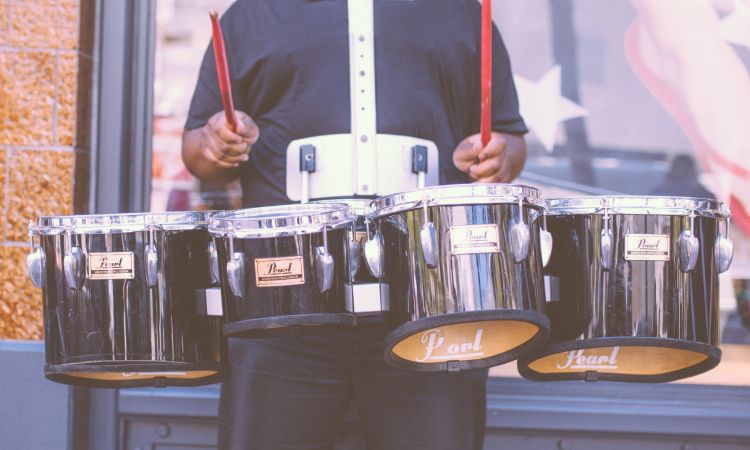 The last main type of percussion instrument that is a staple in a marching band is the cymbals. These cymbals have straps, and players will hold one on each hand and clash them together when the time comes to play them.

Players hold them in a way that keeps their hands flat and on around the bell. This is called the Garfield grip. It gives the players more control over the cymbals and allows them to do flashy movements.

Since the cymbals aren’t played as often as the previous percussion instruments, cymbal players are often the showmen of a marching band. They move the cymbals around in an impressive way to create a visually appealing performance.

Players will use varying sizes of cymbals to cover the sonic range, but the cymbals will typically always be between 18 and 20 inches in size. Anything too small won’t pierce through the sound of the band and anything too big will be difficult to march with. 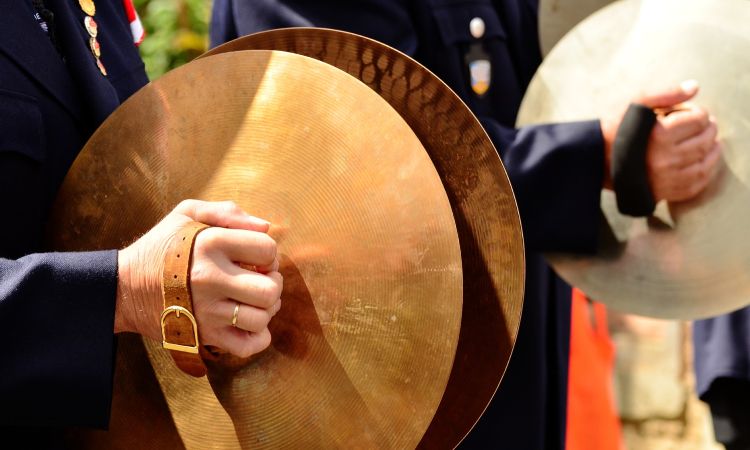 These instruments all produce melodic notes that follow the musical scale. They’re labeled as percussive instruments because the players use sticks to play them. Just like with all the previous instruments, they’ll have harnesses that you can put over your shoulders that allow you to march with the instruments.

Mallet percussion instrument allows for melodies to be played from the percussion section. The players who play these don’t do tricks that are as flashy as the music parts are typically a bit more challenging to play. 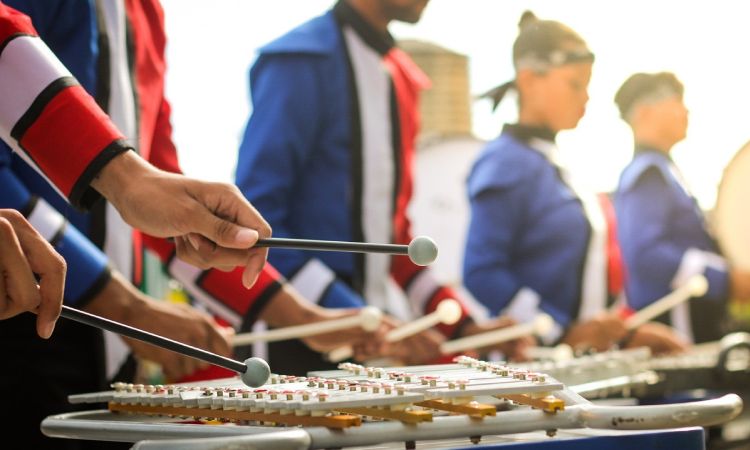 While the standard instrumentation can be found across most marching bands, sometimes percussion sections will include players using instruments that aren’t too common in marching band environments. The best name for this would be auxiliary percussion.

This includes things such as cowbells, electronic pads, shakers, and anything percussive that doesn’t fit into the previous categories. When marching bands play modern music, auxiliary percussion parts are often quite vital.

Some marching bands even make use of timpani players. A few decades ago, timpani players used to march with the rest of the band. However, timpani players typically stay in one position nowadays. Timpanis are very large, so marching with them isn’t possible for extended periods.

A timpani player will have up to 5 large drums around them that can all be tuned to different notes. Advanced timpani players will change the tuning in the middle of songs to achieve a wider range of tones. This is done by adjusting the pedals below each timpani.

These drums are played with mallets, and they provide the largest sound out of any percussion instrument in a marching band.

Drummers play all the parts themselves. They can do this because a drum kit covers all the frequencies in the tonal spectrum. However, there’s usually only one drummer in a band.

The beauty of marching percussion is that there are dozens of players, leading the percussion parts to sound big and powerful. You’ll sometimes find a drum kit player in a marching band on special occasions, but drum kit playing is mostly reserved for small band ensembles.

If you’ve never watched a marching band drumline in action before, you should check out some of the popular videos on YouTube. It’s incredible what those musicians do on a field. They somehow manage to play amazing-sounding songs while pulling off wild tricks and movements.

Remember that you’re going to need to be fit as marching isn’t for the faint-hearted!