Drumming video games have the potential to provide you with a good sense of timekeeping as well as improve your rhythm skills. They can also be a lot of fun!

Unfortunately, there aren’t many good drum-playing games on the market. But we’re going to look at a few of the most popular drumming games available. I’ll also explain what makes a good rhythm game and whether playing one is beneficial to your real drumming skills.

If you think about drumming overall, there are several key aspects that surround it. These would be rhythm, listening, timing, and coordination. For a drumming game to be good and fun, it should include these aspects in some way.

You’ll find that most drumming video games have a timed strategy system where you need to hit a surface as you see a prompt on the screen. If this system brings into play your sense of timing and rhythm, you can say that it’s a fairly good game. It needs to run smoothly, though, as a buggy game will completely throw your rhythm off.

A good drumming game should also be timeless and invigorating. Some games have high prices. They wouldn’t be worth it if you didn’t come back and play the game over and over. Drumming games are typically arcade-style, so don’t expect them to have any riveting storylines. Just make sure that it’s a game that draws you in over and over.

How Beneficial Are Drum Video Games?

There are certain aspects of drum games that improve your drumming while other aspects are left missing. The biggest benefit is that they work on your sense of rhythm and timing. The timed response gameplay loop will train you to feel pulses and stick to them.

The areas where drumming games aren’t beneficial are musicality and dynamics. While some games will have a bit of dynamic variation in how you’re supposed to hit the pads, most of them don’t have that. It’s more important that you hit the pads solidly rather than playing them dynamically with soft and loud hits.

And while you get to listen to music while playing the game, you don’t get a choice in the drum parts. So, you’re not developing any creative skills since you’re not choosing what rhythms to play.

So, drum games are fairly beneficial, but you’ll need to practice more as they don’t offer everything you need to be a good drummer.

Will Drum Games Make You Better at Playing the Drums?

Being good at a drum game won’t make you great at playing acoustic drums if you’ve never played them before. However, it may give you a slight edge. Since drum games exercise your ability to play steady rhythms with your hands, those skills will transfer over to a full drum set.

Some drum games will also teach you about the layout of a drum set. As you move over from the game to a set, you’ll be able to easily identify all the drum parts.

However, no drum games have a fully replicated version of a drum kit to play on. So, playing beats and fills is going to feel very different when you’re playing on the real deal. You also won’t have any guidance from a screen to help you through playing those beats and fills.

If you already own a drum set and want to have fun while learning to play the drums, I’d highly recommend trying out Drumeo.

It’s filled with awesome drumming content, including fun lessons, courses, playalongs, and TV shows, and as you progress through the app, you gain XP like a video game. You can sign up for a free 30-day trial by clicking the image below.

Now that we’ve looked at what makes a good drumming game and how useful they can be, let’s look at some of the top-rated virtual drummer games. These five games have been incredibly popular over the years. 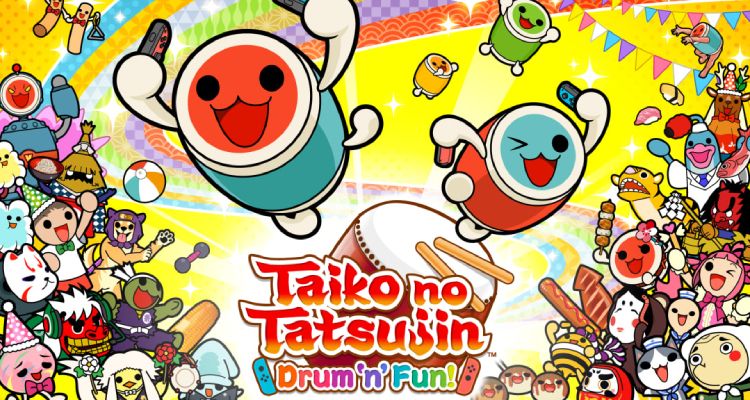 Taiko No Tatsujin is one of the most popular rhythm games in the world. While you can get it on PlayStation and Nintendo Switch, you can also find it in thousands of arcades around the world. The game has you playing a taiko drum to match the rhythms that fall down the screen as songs progress.

Thankfully, the taiko drum that you need to buy to play the game is fairly affordable. If you don’t have the game yet, you can also find a bundle that comes with both the game and the drum.

This game focuses purely on your hands. The sticks that you use are also much thicker than standard drumsticks. So, it’s a slightly different way of drumming, but it will help improve your rhythmic abilities. 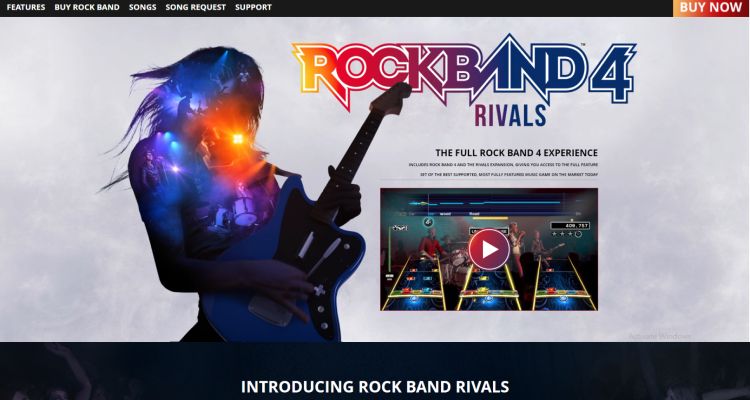 Rock Band has been one of the most popular band video games for the last decade. The whole idea of the game is that you can get together with friends in a living room and pretend to play in a band performing in front of thousands of people.

The most current version of the game is Rock Band 4 for Xbox One and PlayStation 4. The cool thing about Rock Band is that it’s not limited to drums only. You get to use a guitar as well as sing into a microphone.

The drum kit controller for the game has 4 pads and a footswitch for the kick drum. To play the game, you need to match the colors on the screen to the colors of the drums at the correct timing of the song. 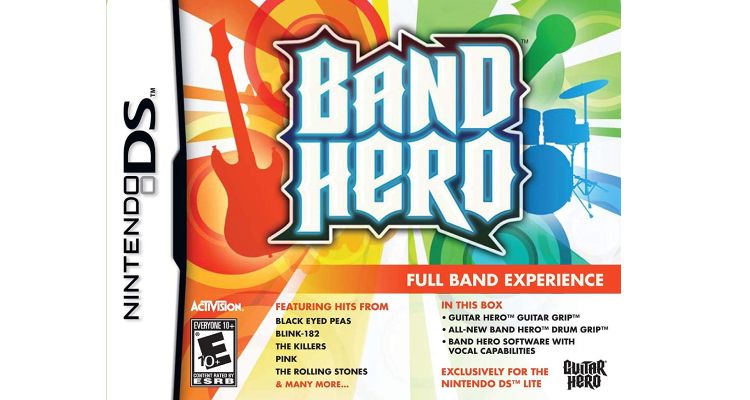 Band Hero is very similar to Rock Band. It was part of the Guitar Hero series of games which were the most popular games in the world at one point. Unfortunately, these games have been discontinued. You can still find some Band Hero drum kits here and there, though.

So, if you still have an Xbox 360 or PlayStation 3, you can play the drums along with some iconic bands and musicians. The only difference between the Band Hero drum set and the Guitar Hero one is that the Band Hero kit only has 3 drum pads. 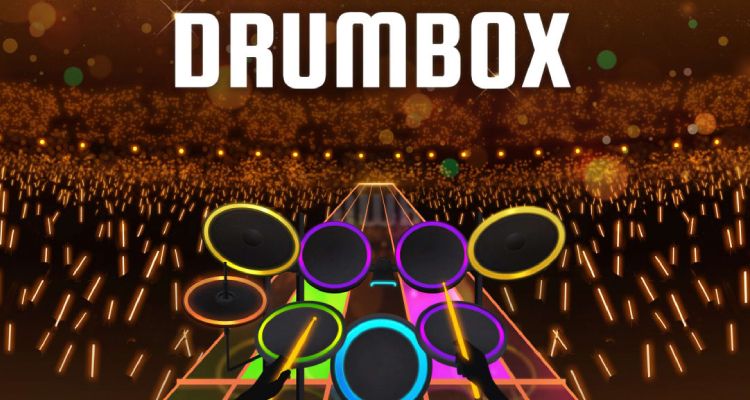 Drum Box is an interactive rhythm game on Nintendo Switch. While no physical drums or drum controllers are used, the game works in a similar fashion to the previous ones. You play the drums as the prompts come across the screen.

However, the prompts are assigned to the buttons on a Nintendo Switch controller. This game isn’t as beneficial when it comes to the technique of holding drum sticks, but it’s quite beneficial for your hand-eye coordination and listening abilities.

The big benefit of it is that you can play it while lying in bed. In the game, you can choose different drum kits to play with varying sounds. There’s also a freestyle mode where you can create beats without playing along with songs.

It’s a small arcade-like game, making it a lot cheaper than some of the previous drumming ones. If you don’t have access to full drum kit controllers, this is an excellent game to try out. 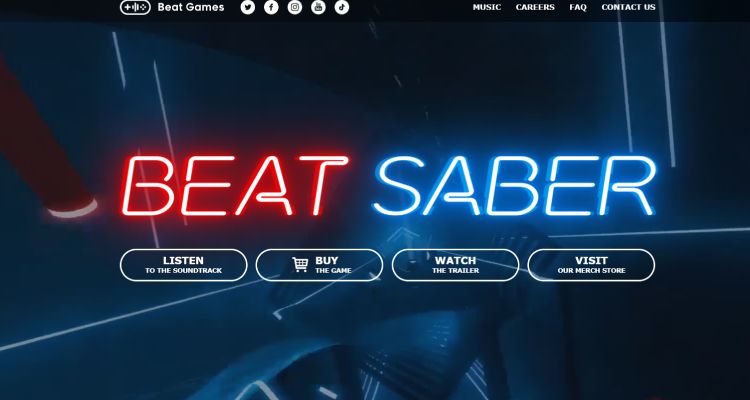 Beat Saber is an incredibly popular virtual reality rhythm game that has you chopping blocks with a saber as the music plays. The blocks come down in rhythmic patterns, meaning the game develops your overall sense of rhythm. The better your rhythmic sense, the better you’ll be at the game.

It’s highly fun and addictive, and it’s an excellent game to play with friends. Similar to Drum Box, it’s not going to improve everything about your drumming skills, but it will improve your rhythmic abilities specifically.

Can You Learn to Play Drums on a Video Game Drum Set?

It’s not advisable, but you could learn a few things on a video game drum set. It would be the same thing as setting up a few drum pads to work on rhythms. However, video game drum sets generally aren’t as solid as practice pads.

If you want to learn how to play the drums, you should find a proper drum set. If an acoustic drum set is too big or loud, you could opt to get an electronic drum kit.

The best way to learn to play the drums is to take lessons – either in person or by using the amazing Drumeo membership platform which will help you to drastically improve your skills as a drummer while having fun in the process!

If you’re looking for some free drummer games that will improve your rhythm, timing, and feel, you could also look on the Google Play store or the Apple app store for some easy-to-digest drumming apps. They won’t be as beneficial or fun as the games we looked through above, but they’ll provide you with a bit of drumming excitement.

At the end of the day, video games still have a long way to go if they want to make drumming feel realistic. Rock Band has gotten close, and hopefully, the game will keep getting closer and closer with every newly released version.