Drums are widely believed to be the world’s oldest musical instrument – having been played by our prehistoric ancestors many thousands of years ago! As you may expect, drums come in many different forms.

The modern drum set however is a new invention. In this guide I’m going to share with you all the different types of drums you are likely to encounter within modern music, and also some less familiar kinds of drums that are played around the world!

Types of Drums In a Modern Drum Set 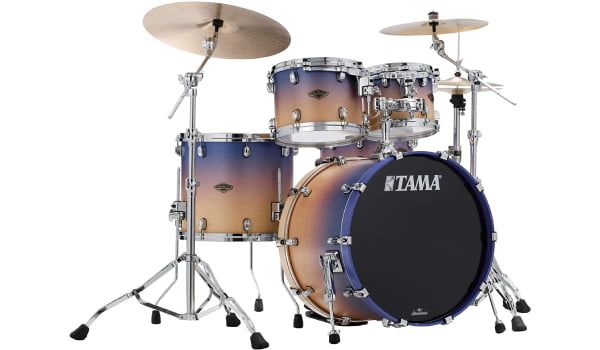 The modern drum set came into being in the early 20th century, as manufacturers such as Ludwig and Gretsch began developing drum set equipment such as bass drum pedals and snare drum stands. This allowed the framework for a modern drum set to come into being. By the 1940’s the drum set became a staple part of popular music.

Modern drum sets come in all different configurations and sizes. But the most common setup is a 5-piece drum set, consisting of a bass drum, two rack toms, a floor tom, a snare drum. A drum set will also include a set of cymbals that are mounted on stands: a pair of hi-hats, a crash cymbal and a ride cymbal.

Drum sets are most commonly constructed from hardwoods such as Maple, Birch, Poplar, Mahogany, Walnut, and many more types. I’ve written a detailed guide on the different types of drum woods here! 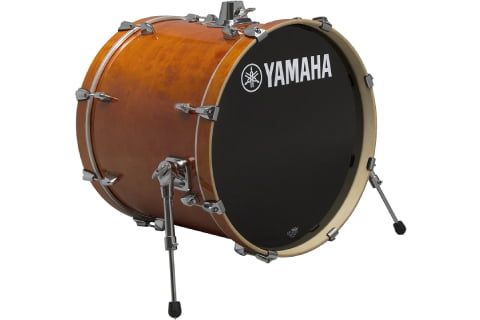 Also known as the kick drum, the bass drum is the largest type of drum within a drum set. It’s played with a bass drum pedal, which is operated with a foot. The sound is produced when the pedal beater strikes the drumhead. The bass drum provides the punchy low-end tone of the drum set that drives the beat of a song. Bass drums are most commonly 20-24 inches in diameter but this can vary. 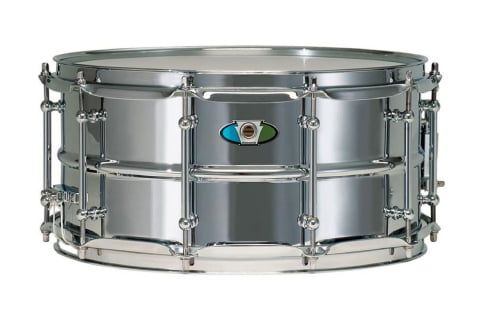 The snare drum is the iconic drum within modern music in the western world. It’s the most played drum within the drum set, and produces a distinctive high-end pop sound. The snare drum features a selection of snare wires on the underside of the drum that resonates when the batter drum head is struck.This produces the iconic snappy sound that helps to drive the groove. 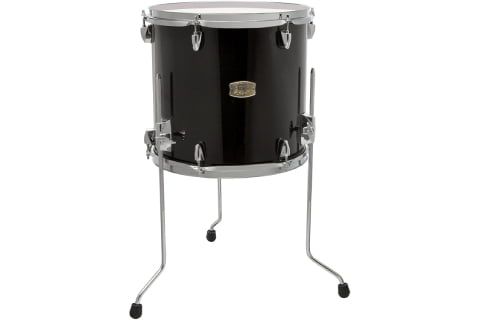 After the bass drum, the floor tom is the second-largest drum type found in a typical drum set. It produces a low-end boomy sound with a deep tone. It’s commonly played within drum fills but it can also be used for funky grooves . Floor toms are typically 14 or 16 inches in diameter and they are either supported upright by floor tom legs or they are mounted to a cymbal stand. 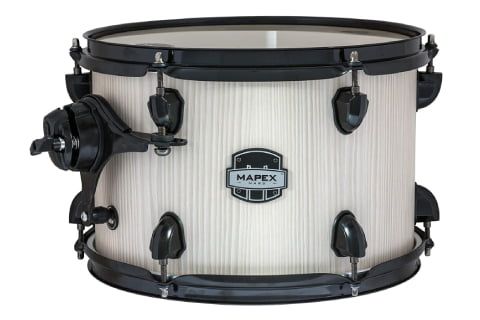 The last types of drums featured in a typical 5-piece drum set are the rack toms. The rack toms produce an open, resonant sound when struck with a defined pitch and tone. The rack toms and floor tom are tuned to descend in pitch, helping to create a diverse range of sounds within drum fills and grooves. Rack toms are most commonly 10 and 12 inches in diameter respectively in modern drum sets, but sizes can vary.

Types of Drums From Around the World

There are lots of different kinds of drums that pre-date the modern drum set. These types of percussion instruments have traditionally found their place within respective world music cultures, but they are also now used within popular western music. These types of drums are almost exclusively played with hands as opposed to drum sticks! 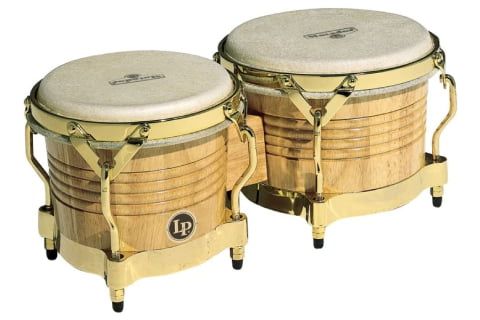 The bongos are an Afro-Cuban percussion instrument that consists of two individual drums that are known as the Macho and Hembra respectively. The hembra is the female, and this is the larger drum, whilst the macho is the smaller male drum. The drums traditionally feature raw animal hide drum skins. The two drums are connected by a sturdy piece of hardwood and the bongo drums are played in between the legs of a drummer or mounted on a stand. 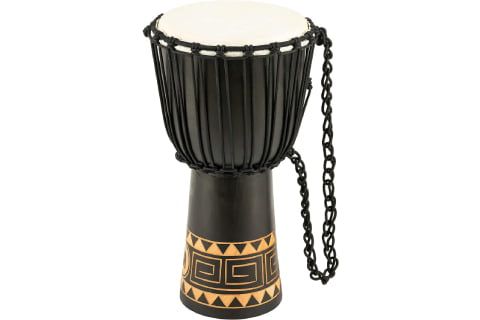 A djembe drum is a large rope-tuned drum that originates from West Africa. The djembe alongside other African percussion instruments play a huge part in African culture, and they are played at events such as weddings and other celebrations. The djembe is crafted from solid hardwood such as Mahogany and the drumhead is often rawhide animal skin. An interesting fact is that djembes are traditionally only played by men! 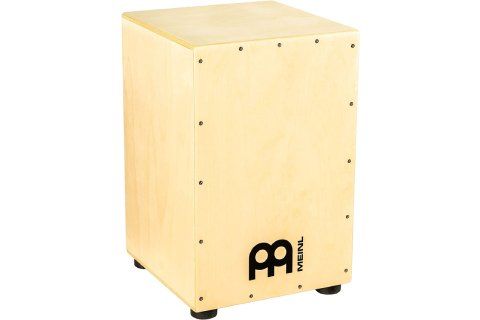 The cajon is a box-shaped percussion instrument that originates from Peru, and it’s now become one of the most popular drum types to be used for live acoustic performances. The front face of the cajon is played with either hands, brushes, or drum sticks. Depending on where you strike the cajon it produces a wide range of sounds. The cajon is sat on whilst it’s played, which makes it amazingly portable and versatile as an instrument! 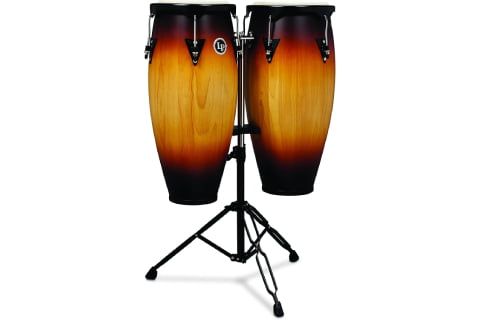 Conga drums are tall, large single-headed drums that look like barrels. They originate from Cuba and they were originally used in Afro-Cuban music and they are now very popular in Latin music amongst other genres. Congas are one of the more popular drum types favored by percussionists. They feature a hardwood shell construction and need to be mounted on stands in order to be played. 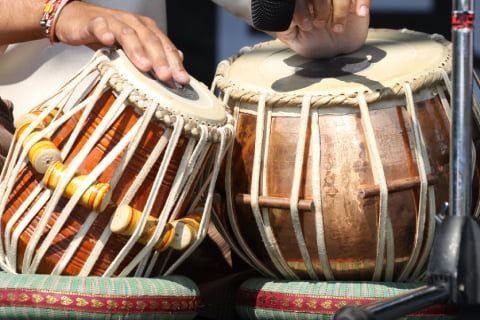 The tabla is the distinctive percussion instrument that originates from the Indian subcontinent. The tabla is fundamental to the Hindustani music of India, Pakistan, and Bangladesh. It features two drums known as the Daya and Baya. The Daya is the higher-pitched of the two and is played to the right side, and it’s tuned to the tonic note of the raga (Indian scale). The Baya has a deeper sound and is made from copper, whilst the Daya is commonly made from wood.

Types of Drums Found in an Orchestra 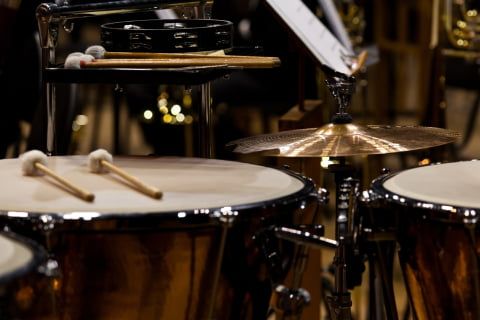 Orchestras utilize different types of drums within the percussion section to add rhythmic layers and intense dynamics within a composition. There is an enormous range of auxiliary orchestral percussion including wood blocks, wind chimes, claves, guiros and more. Mallet percussion instruments such as the marimba and vibraphone are also prominent. But I will only be sharing the staple drums found within an orchestra. 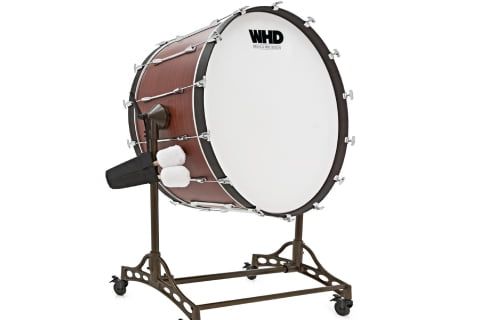 The concert bass drum in the orchestra is played standing up with a large mallet. It is much larger than a bass drum that is found in a drum set – up to 40 inches in diameter! Concert bass drums are supported on a stand or sometimes suspended on a frame. They also have very little dampening which produces a very deep rumble with a long sustain. 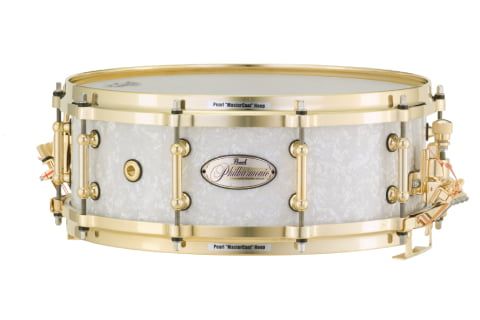 Concert snare drums reinforce rhythms within an orchestra with their easily recognizable short and snappy accents. Concert snare drums can be played with pianissimo dynamics all the way to loud whip-crack like punctuations. The snare drum offers a military-type theme and sound that creates a consistent rhythmic feel with tight and precise sounds. 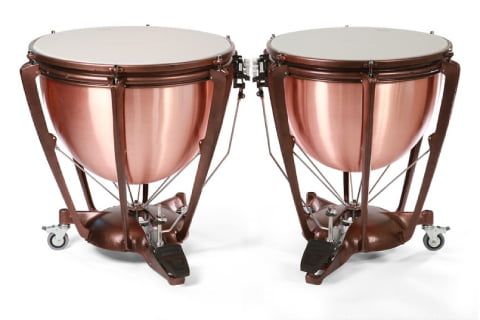 Arguably the most famous types of all the orchestral drum types – the timpani is a large copper drum that is tuned with a foot pedal to a desired pitch. No orchestral percussion section is complete without a set of timpani! Orchestras most commonly feature four timpani. The timpani are struck with a mallet a few inches away from the edge, producing a round, resonant and full sound.

There we have it! These are the most common types of drums you will encounter in modern music. There are of course, many more types of drums and percussion that exist in the world. But to detail them all in one guide would be almost impossible! After all, drums are found within every culture on earth. But I hope this article has helped you to identify and understand the different drums you’re likely to encounter.