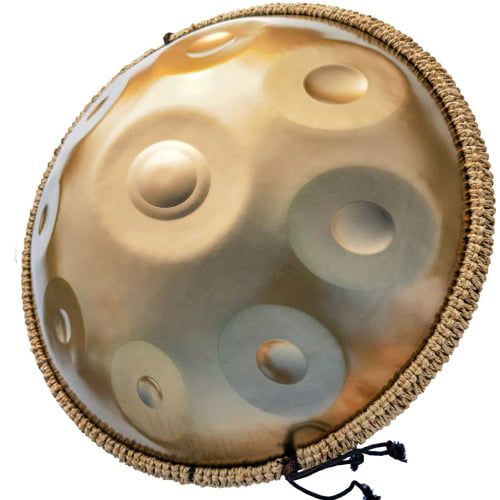 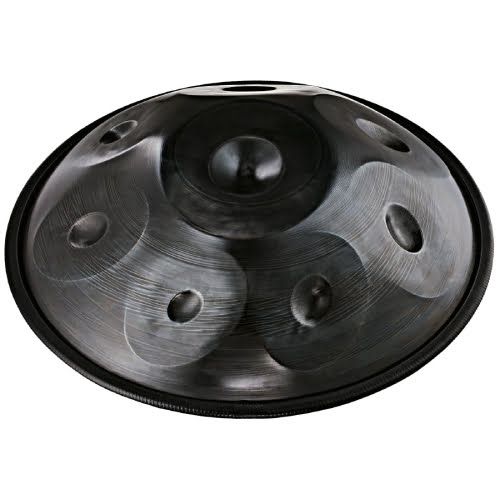 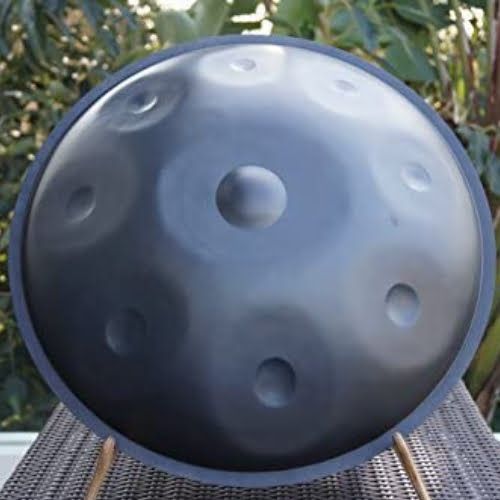 In this guide, we’ll take a look at the best handpans and hang drums for performing enchanting melodies.
I’ve compared performance, build quality, sound quality and cost to give you my top recommendations.

What Is The Best Hang Drum?

The Meinl Percussion Sonic Energy model is an excellent handpan drum option, and every instrument sold is individually hand-crafted in Colombia, using high-quality steel from Germany. This steel provides excellent durability, even with long-term use, and as a buyer, you know you are purchasing a carefully-made work of art.

Like other hang drum or handpan options on the market, the instrument benefits from fixed tuning, meaning it will hold its tuning over time and will never need to be re-tuned. It is tuned to D# major and offers the following notes: D#, G, A#, D, D#, F, G. The steel also benefits from a black finish, offering a sophisticated appearance.

In order to make the handpan drum easier to carry around, Meinl Percussion’s instrument also comes with a robust carry case, which is able to protect the drum, without adding too significantly to the overall weight. 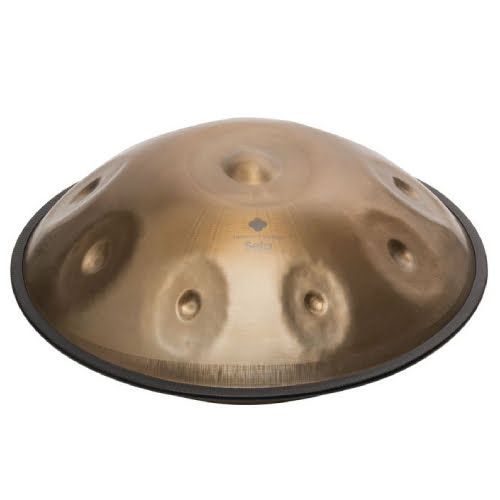 The Sela Harmony Handpan Drum is a slightly more budget-friendly option but retains the features you would expect from a hang drum or handpan. The instrument is hand-crafted from stainless steel, has nine tone fields for playing notes, and is able to maintain its tuning even after frequent, long-term use.

The pan drum itself has a gold-colored finish, providing a classic aesthetic, and it also comes with a carry case, which can easily be held or worn on your back, allowing for easy transportation of the instrument.

If you are looking for an authentic hang drum experience, the Tzevaot Handpan Aeolian 440hz is the way to go. The instrument is tuned to the Aeolian scale, offering the following notes: (G), C, D, E, F, G, Ab, Bb, and C. This tuning is maintained exceptionally well, even when used frequently, and there is no need to ever re-tune it.

Tzevaot has emerged at the very forefront of handpan drum manufacturing in the United States, with lead metal tuner, David Parkin, having been involved in tuning for more than two decades.

The company claims to be the only hang drum manufacturer in the country to have no waiting list and instruments are made in accordance with the patented PANArt method, which is why these particular drums are so highly sought after by many hang traditionalists.

The steel of the instrument benefits from a nitride and nitro-carburizing process, which helps to make the hang drum extremely resistant to rust and other similar issues, providing further protection.

As with the other hang drum examples on this list, the Tzevaot handpan comes with a carry case for simple transportation.

Finally, the AS TEMAN Steel Handpan is the most budget-friendly option on this list and is an especially ideal option those looking for a quality handpan at a great price. Despite its relatively low cost, it is crafted with care and it is tuned very well.

The instrument is tuned to D minor, and offers the following notes: D3, A3, bB3, C4, D4, E4, F4, G4 and A4. The hang drum is available in a variety of colors, including gold, black, blue, green and purple. However, due to the nature of the manufacturing process, the precise color of each pan drum will vary slightly from one drum to the next.

This handpan is an exceptional quality drum for the money. It produces a diverse array of mystical and smooth tones. It is tuned exceedingly well and truly offers fantastic value for money. Additionally, as with the other options, a carry case is included. 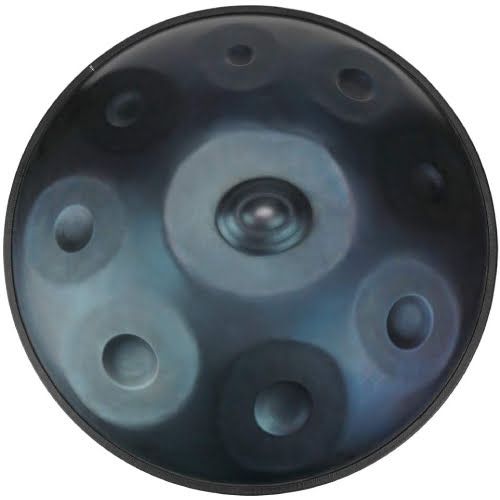 A great option for those seeking a hang drum on a limited budget, the Lark Music Handpan Drum is tuned to D minor, offering the following nine notes: D3, A, Bb, C, D, E, F, G, and A.

The notes have been hand-tuned and the high quality of the handpan drum helps to ensure that tuning does not experience major fluctuations over time.

The drum is hand-crafted from steel and provides pleasant, high-quality sounds. It is also presented with a black finish, offering up a simple, sophisticated aesthetic that will not look out of place in any setting.

The Lark Music Handpan Drum comes with its own protective case, which can be easily carried by hand or worn on the back like a backpack. This allows for both convenient and safe transportation of the instrument.

The hang, handpan or pan drum, which is also sometimes colloquially referred to as the hang drum, is a percussion instrument that belongs to the idiophone class.

Other popular instruments in the idiophone class include steel tongue drums. This categorization refers to the fact that its sound is primarily created by the vibration of the hang drum itself, without the assistance of strings, air, or other outside factors.

In terms of its construction, the handpan drum is made from two steel half-shells, which are then fused together, giving the instrument a hollow center. One of these two half-shells is referred to as the ‘ding’ and it contains a number of tone fields (typically seven or eight) surrounding the middle note.

The pan drum is traditionally played using your hands, but some models do provide an optional mallet.

The Origins of the Handpan Drum

Although the first hang drum was not invented until 2000, its origins can be traced back further. One of its inventors, Felix Rohner, had been playing the Trinidad steel drum since the 1970s and he founded a steel drum company called PANArt in the 1990s, along with his business partner, Sabrina Scharer.

Rohner and Scharer were later asked about the possibility of creating a steel drum that could be played using only the hands, and this request ultimately led to the creation of the first pan drum of this kind – the hang. Technically, only PANArt instruments are officially known by this name and it is a trademark of the company.

However, PANArt ceased making new versions of their instrument in 2013, and similar models are often referred to by the names hang drum by customers and observers, even if they are officially sold as a handpan or a pan drum.

Why Handpans are Difficult to Find

Aside from the fact that PANArt stopped making their own hang instruments in 2013, high-quality handpans or hang drums are generally hand-crafted on an individual basis.

This is a time-consuming process and most manufacturers adopt the approach of making them to fulfill orders that have been placed, rather than creating them in advance.

For customers, one of the consequences of this is that handpans can be difficult to find and the best manufacturers will typically have long waiting lists because they are effectively making the instruments upon request.

What Features to Look For in a Quality Handpan

When seeking a quality handpan, you should look for a manufacturer with a good reputation in this area, such as Tzevaot or Meinl.

Unless you have a tight budget, buy a drum that has been individually crafted from steel and which offers eight or nine notes in total. Your drum should be tuned in advance and should hold its tuning over time.

A good handpan will be made from high-quality materials, enabling it to withstand repeated usage. The very best hang drums will also undergo nitride and nitro-carburizing process, making them resistant to rust and corrosion. 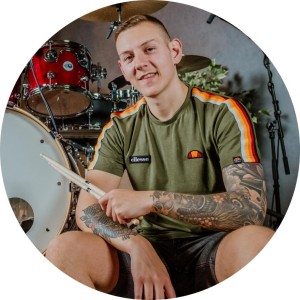