From his humble beginnings in the English town of Redditch to becoming one of the most influential drummers in the history of popular music, John Bonham’s life story is nothing short of remarkable.

Along with his Led Zeppelin bandmates Robert Plant, Jimmy Page, and John Paul Jones, Bonham produced a back catalog of timeless music that redefined the rock n’ roll genre.

“Bonzo,” as he was nicknamed, has influenced each generation of drummers that have preceded him. In this article, we’ll explore all of the reasons for his greatness, from his most obvious attributes to the finer details of his playing.

What Made John Bonham Great?

There are many aspects to John Bonham’s drumming that make him exceptional, but above all, he was a master of dynamics and feel. He could play with incredible power and intensity, but also in a way that is highly expressive and delicate.

Bonham’s timing was also impeccable, and his groove was unrivaled. He had an innate understanding of how to lay down a beat and keep the rhythm moving forward. This made him the perfect drummer for Led Zeppelin, whose music was often complex and multi-layered.

Ultimately, Bonham’s combination of technical skills, feel, and intuition made him one of the most revered drummers in history. His influence is still felt today, and he remains one of the most iconic figures in the world of rock music.

John Bonham spent the first five years learning to play on a snare drum before getting a full drum kit. He was mainly self-taught, which arguably played a significant role in creating his unique, innovative style.

As is brilliantly documented in Drumeo’s The Genius Of John Bonham video, there are several key reasons that the Led Zeppelin drummer is considered one of the greatest musicians of all time.

Whether it’s speed and technique on the bass drum pedal, expert feel when playing grooves on the kick, snare, and hats, or his epic fills and solos, Bonham’s unique style consisted of a combination of expert skills.

Let’s examine the main reasons behind the Led Zeppelin drummer’s undeniable excellence behind the kit.

King of the Kick Drum

John Bonham’s control of his single bass drum pedal is legendary, and sometimes it’s easy to forget that he wasn’t using a double kick pedal to create his fast-paced loops.

The opening track from Led Zeppelin’s debut album, “Good Times Bad Times,” introduced the world to Bonham’s blistering bass drum doubles. If you’re interested in examining the drum notation for this song and many others, check out this excellent guide by Drumeo.

Playing doubles and triples on the kick drum became one of the signature traits of Bonham’s drumming, and was something that he used in his grooves, fills, and solos throughout Led Zeppelin’s decorated career.

This influenced the drumming used in metal, rock, and arguably even hip-hop and rap music decades later. Bonham’s legacy can be heard in almost every genre of popular music.

Developing Bonham’s speed and timing on the kick drum takes a lot of time and dedication, but with consistent practice, you’ll be able to improve your skills when using the pedal.

Technical skills were a factor that made John Bonham a remarkable drummer, but another essential quality that he had in abundance was feel.

Feel is difficult to quantify, and some believe that a drummer either has it or they don’t. I’m of the opinion that feel can be developed, but there is undoubtedly a natural aspect to it, and John Bonham was blessed with bucket-loads.

From the way that he used his cymbals in the many atmospheric soundscapes that were featured in Led Zeppelin’s music to the subtle tom fills that punctuate his grooves, Bonham’s feel was exceptional.

Bonham’s feel is most noticeable in the less complex grooves that he played in many of Led Zeppelin’s songs, with some notable examples being “Kashmir,” “Rock and Roll,” and “Black Dog.”

Want to learn how to play like Bonzo? You can learn ten of Bonham’s best-known Led Zeppelin drum grooves for free in this excellent series by Drumeo, which is perfect if you want to improve your feel and technique. 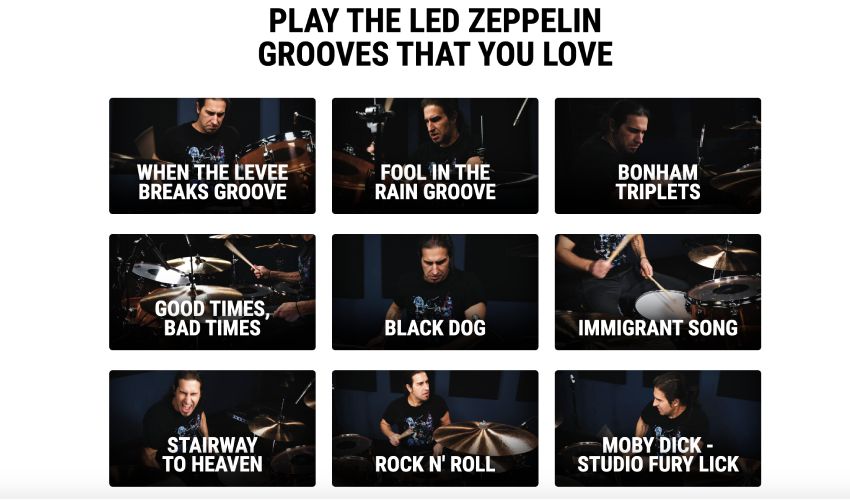 You don’t need a membership to gain access to this free Led Zeppelin video series, but if you’re interested in developing your skills as a drummer, you can try Drumeo for free for 30 days by clicking this link here!

Drumeo is the best drum education platform out there, with thousands of professionally filmed lessons from the world’s best drummers, and a clear progression system that is fun and rewarding.

You’ll also have 5000+ Songs and practice tools with an intuitive in-app player plus full notation and tempo adjustments.

To gain access to lessons and guidance from the world’s best drummers across a wide range of genres, then click the link in the banner below.

Another thing that made John Bonham such a special drummer was his ability to create the perfect groove to suit Led Zeppelin’s music. The band’s bass and guitar parts were often very complex and innovative, and Bonham complimented them expertly.

Rather than sticking to the obvious pulse of a song, Bonham wasn’t afraid to place emphasis on different beats. His ability to switch between grooves and even change time signatures fluidly was unrivaled.

Tracks like “Immigrant Song,” and “The Ocean,” are perfect examples of Bonham’s effortless ability to write and play grooves. He was always in the pocket and used his cymbals and hi-hats to great effect.

It’s one thing being able to play grooves with feel and timing, but it’s another thing altogether to write them.

Bonham and Led Zeppelin bassist John Paul Jones formed a ridiculously tight rhythm section, knowing exactly when to sit back and allow the guitar and vocals to flourish or when to move into the spotlight.

Another trademark quality of John Bonham’s drumming was his power. This doesn’t necessarily mean he always hit the drums hard, but rather that he knew how to get the biggest sound from his drum set.

Led Zeppelin’s drum sound was somewhat of a departure from the tighter sounds that had been used throughout the 1960s. Bonham’s kit often sounded highly compressed, with the snare drum sounding like a huge “smack” and the kick drum having a boomy tone.

Compression can often make the drums sound like they are being hit harder because it increases the quieter hits to a predetermined level.

Very few drummers in history can be identified by simply hearing a couple of bars of them playing, but Bonham’s powerful sound is instantly recognizable, which is a testament to his individuality.

For most of his career, Bonham used Ludwig drums, which suited his playing style perfectly. He knew when it was the right time to thrash the drums with all of his might and when to hold back.

One famous example of Bonham’s powerful sound is the song “When The Levee Breaks.” The story goes that the drummer was placed at the top of a three-story staircase with microphones above him.

This gave the recording a unique, echoey sound. It’s an incredibly powerful drum take that only Bonham could create.

One of the things that separates John Bonham from most rock drummers is that there were no holes in his game. In addition to all of the other aspects of his playing that we’ve discussed, he also knew how to lay down epic drum solos.

The most famous solo that Bonham ever played was included on Led Zeppelin II, released in 1969. Titled “Moby Dick,” it was the result of Jimmy Page capturing Bonham’s improvisations in the recording studio.

“Moby Dick” was a staple of Led Zeppelin’s live shows, with the duration ranging from around 6 to 30 minutes in length.

The other band members would play along with Bonham in the intro of the song, then leave the stage as he played his drum solo.

Audiences were often left awestruck by Bonham’s complex rhythms, fast-paced playing, and flawless technique during his solos. He had excellent control over the dynamics of his drum set, which can be heard in the many live recordings.

Despite passing away at the age of 32, John Bonham has left behind an incredible body of work that most drummers couldn’t dream of producing in a full lifetime.

His influence on the drummers that preceded him cannot be overstated, and his drumming continues to inspire musicians worldwide over 40 years since his death.

His son Jason Bonham has played with the other members of Led Zeppelin on occasion and is also blessed with some of his father’s drumming talents.

Bonham was heavily influenced by jazz drummers when learning to play, and this is one of the things that made him such a unique rock drummer. He combined feel, power, timing, and stamina.

After his passing, the other members of Led Zeppelin disbanded, which is another illustration of how important he was to the band’s sound. Many bands have carried on after changing drummers, but John Bonham was such an integral part of Led Zeppelin that this simply wasn’t an option.

Just as Led Zeppelin is as relevant and revered today as they were in their heyday, John Bonham is also still an icon of rock music.