Drummers are often the unsung heroes of a band. Along with their timing and technical skills, they’re renowned for being expressive, which can lead to them making some unusual, animated faces!

The importance of a drummer in a band or ensemble is undeniable. They must set the tempo of a song, maintain their consistent rhythm throughout, and help to keep the other band members in time while playing.

This article explores the potential reasons that drummers may make strange and funny faces when playing their instrument.

Why Do Drummers Make Funny Faces?

The most common reason drummers make funny faces when performing is because the instrument is physically demanding to play. Like any form of exercise, it naturally evokes a response from the person’s facial expressions.

Also, if a drummer is expressive, it will likely engage the audience more!

When you play drums, it requires fast and consistent movements. It also simultaneously engages several different parts of your body, with all your limbs being used.

Drummers often play complex rhythms at fast tempos, and they need to have good endurance to do so. So when you next see a drummer making a funny face, it’s likely because they’re putting in some hard work to keep the beat!

Why Do Drummers Make Weird Faces? 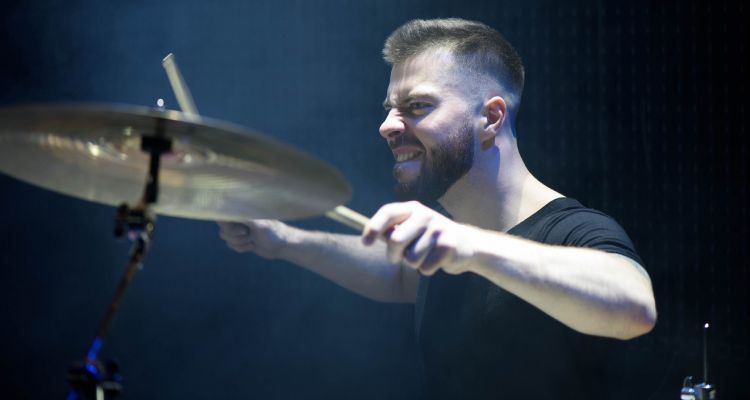 If you’ve ever played the drums before, you’re probably aware that it requires a lot of energy and focus. Drummers are often eccentric performers, and one aspect of this is the weird expressions you often see on their faces while playing.

The most likely reason drummers make weird faces is how physically taxing playing the instrument can be. The faces they make can be caused simply by having to concentrate so hard on staying in time and also exerting a lot of physical energy.

Most instruments require the musician to use two or three limbs simultaneously. Drums, on the other hand, need the drummer to use their hands, arms, and legs simultaneously, playing various individual percussive instruments that combine to make the whole drum set.

It’s also common for drummers to play at fast tempos. They may be required to play 16th-note hi-hats or double kick pedals, which need a lot of speed, stamina, and accuracy. Therefore, the weird faces they pull are a natural byproduct of the physical and mental work they must put in to play the drums to a high level.

Another reason drummers make strange and funny faces while playing is that they want to entertain the audience as much as possible.

If you see a drummer making strange faces when performing live, they may be trying to engage members of the crowd. Drummers can’t move around onstage, but they can move their faces!

Despite being usually positioned at the back of the stage, a drummer is often the central member of a live band. They can get the crowd pumped and engaged through the energy of their playing and through the way they look.

It’s also a common belief that drummers are the “wild” members of bands, which of course, isn’t always true. However, a drummer may try to live up to this reputation when performing, and making funny faces is a great way to do so!

Being a Drummer is Not Easy! 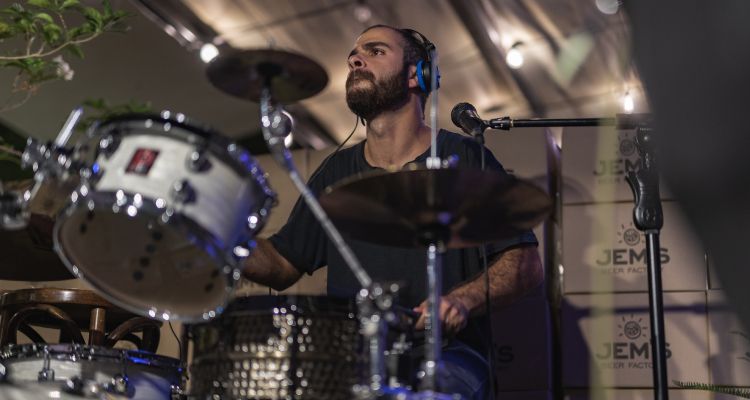 As we’ve discussed, drumming is one of the more physical instruments that a musician can play. It’s also a challenging instrument to learn, particularly in the early stages.

If you notice a drummer with strange facial expressions while playing, it may be due to them being a beginner or inexperienced and in the process of developing their skills.

Think about it this way, when you first drive a manual car, you feel completely overwhelmed by the fact that you must do so many things at once. Steering, putting the clutch down, changing gears, braking, and accelerating all require such focus initially.

Drumming is similar in that it feels very difficult to play the various drums and pedals at once before you build coordination, dexterity, and hand-eye coordination. It’s natural, then, that a beginner would look like they were focusing very intensely!

When a drummer has been playing for a long time, they may look very relaxed behind the kit, even when their hands seem to be moving at lightspeed!

This is simply because they’ve practiced for so many hours that drumming feels like second nature to them. They don’t need to focus so intensely to be in the pocket because of the repetitive work they’ve put into their craft.

Listening to Other Musicians

Drummers are an integral part of a band, ensemble, or group. One of the most important abilities they must have is listening to other musicians during a performance or recording.

Firstly, this is important because, in most cases, the drummer is the musician responsible for setting and maintaining the tempo of a song. The rest of the musicians are forced to follow if they speed up or slow down.

To maintain a consistent tempo and rhythm, the drummer has to listen to the other musicians and their inner metronome. To do this, they often count out the beats in their head, mainly if they play in alternative time signatures or complex grooves.

Combined, the bassist and the drummer are known as the “rhythm section.” When these two instruments are locked in, the whole groove of the music improves.

A drummer may pull strange faces to appreciate the performance of the bassist or another musician in the band. Or they may be expressing the feeling of being totally “in the pocket,” which means incredibly tight!

Furthermore, the drummer must listen to the other musicians because they may be playing in styles of music that they’re not necessarily accustomed to. This requires a lot of focus, and focus often results in strange facial expressions!

Any musician will tell you that it’s tough to look miserable when you’re playing with a group of other musicians in the groove. Our faces naturally change and move as we feel the beat and rhythm of the music more. 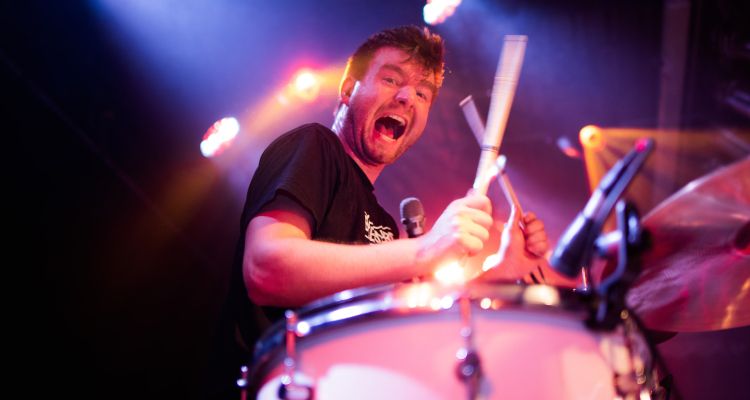 When we’re having fun, we often express this with our faces. This is true whether you’re playing a sport you enjoy, watching your favorite comedy movie, or playing an instrument.

Drums can be one of the most fun instruments to play, and they’re a great way to get your energy out. Many people find drumming to be therapeutic and can help them deal with stress in their lives.

If you see someone pulling a funny drummer’s face, this may be because the drummer is having a lot of fun playing. This naturally causes them to grin, smile, or move certain parts of their face, like we all do when we feel happy.

Drumming releases endorphins, as all physical activities do. It can also release dopamine, making us noticeably happier as we play. When this happens, a drummer may show their emotions on their face.

Drumming in a band is great for connecting with other people. Being part of a tight-knit group can also make us happy, which may lead to a few funny facial expressions!

As a drummer or any musician for that matter, the most important thing is the sound you create. However, the visual aspects of a performance are also a large part of it.

Many bands and artists play characters when they perform, creating stories and acting out roles onstage. This may be another reason that drummers pull some strange faces – they are putting on a performance.

Punk bands, for example, sometimes have an aggressive look about them or come across as uninterested. While this may be their genuine persona, in many cases, it’s them playing a role within the band which suits the style and genre.

Keith Moon, the drummer from the band The Who, is one of the best-known musicians for pulling funny faces and adding humor to his performances. Moon was incredibly talented as a drummer, but his expressive style contributed to his popularity.

Music is a performative art, just like theatre or acting, but the focus is predominantly on the music rather than the script. However, musicians still use acting and role-playing to make them more interesting for the audience or to fulfill their artistic visions.

In this guide, we’ve covered all the potential reasons drummers may pull funny faces. Now, the next time you’re at a gig and notice some peculiar facial expressions from a drummer, you know why!

Drumming isn’t easy, physically or mentally. It requires a great deal of dexterity, speed, control, and mental focus, and this is why you can often see the concentration on a drummer’s face when they play.