Cocktail Drum Sets – A Guide To Stand Up Drum Kits

Cocktail drum sets are distinctive and quirky drum kits. Not only do they look unusual, but they are played unconventionally – while standing up!

Cocktail drum kits were very fashionable in the past, and hence the name, they were popular in jazz bars and cocktail lounges. They were invented as a practical solution to help accommodate drummers into small spaces.

In this article, I’ll explain what exactly a cocktail drum set is, I’ll be sharing some of the benefits, I’ll tell you how they came about existence, and I’ll also let you know what the best cocktail drum set available to buy is.

What Exactly is a Cocktail Drum Kit?

A cocktail drum set is made up of various drums, cymbals, hardware, and percussion items much like a conventional drum set. A cocktail drum set, however, features much smaller components and is designed to be played standing up.

Traditional cocktail drum sets feature a long and narrow drum that is placed upright and could function as a bass drum and a snare drum. All the other drum set components, such as cowbells and splash cymbals, were typically mounted from this drum’s shell.

Modern cocktail drum kits can come in various shapes and sizes, but what generally constitutes a cocktail drum set is the requirement for it to be played while standing up.

They produce quieter sounds compared to normal drum sets because of their smaller sized drums and cymbals. They also provide tighter, snappier, and crispier sounds due to the smaller-sized components.

When Were Cocktail Drum Sets Invented?

Cocktail drum sets were prized in mid-century cocktail lounges, where bebop jazz was played. The earliest form of the cocktail drum set was invented in the 1940s, with the Carlton Combo kit, which consisted of a 20-inch deep vertical bass drum, a snare drum, cymbal, and other percussion items.

These early cocktail drum kits came about after World War II when jazz music reigned supreme, but smaller bands playing bebop music were starting to emerge on the scene.

The cocktail drum set’s retro design became a huge hit and its small design proved especially useful as a jazz drum set in allowing drummers to perform in smaller music venues, including the smokey jazz bars we all associate the cocktail drum set with.

What Are The Benefits of Cocktail Drum Sets? 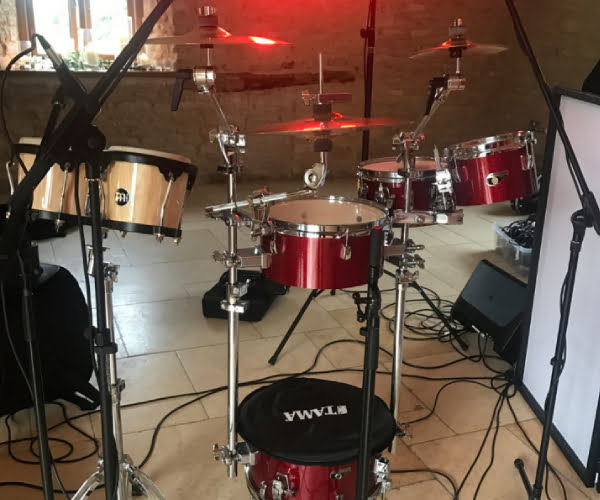 Cocktail drum sets look unusual, but there are lots of great reasons why drummers choose to play on them. Above is a photo of my cocktail drum set at a recent show!

I frequently play a cocktail drum set at weddings, parties, and other events. They are incredibly portable (all my drums and hardware fits in two bags), and they take up a tiny footprint on stage.

This makes them particularly useful for when I play in small lounges and music bars, or where I might only have a small amount of space to set up my drums next to a DJ table or booth at a venue.

Not only are cocktail drum kits portable and easy to transport to and from gigs, but they are also a lot of fun to play and sound great too. It’s only a little tricky getting used to playing the bass drum pedal while standing up at first!

I can set up my entire cocktail kit in a very short amount of time (around five minutes), and it consistently sounds great! It also sounds good through a PA with drum microphones, and it’s easy to set up additional percussion such as bongos.

Some of the most famous jazz drummers to play cocktail drum sets include Steve Jordan and Mick Fleetwood. Steve Jordan plays his own signature cocktail set professionally with various music groups, while Mick Fleetwood frequently uses his kit at live gigs.

One particular drummer you might not expect to play a cocktail drum set is Travis Barker of Blink 182. That’s right – one of the most animated and loudest drummers in modern times!

It shows that with some creativity and imagination, you can use a Cocktail Drum Set in plenty of different ways. You can also swap out the drum heads and try other tunings to explore a range of new sounds.

What is the Best Cocktail Drum Set Today? 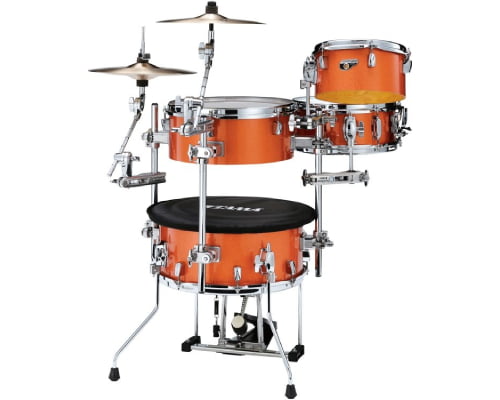 Unfortunately, the popularity of cocktail drum kits has diminished over time, and they are no longer as sought after as they once were. But fear not, there is one great option on the market.

If you are hoping to recreate the long-lost charm of the mid-century bebop lounges, or you’re looking for a portable drum set for smaller gigs, then the Tama Cocktail Jam Mini is the perfect drum set for you.

The Tama Cocktail Club Jam can be packed away into two small bags and sets up in minutes. It is extremely portable and therefore has a significant advantage over standard full-size drum sets.

This cocktail drum set also sounds amazing despite its small-sized shells! The Birch shells are well constructed, and they produce excellent sounds that are surprisingly warm and punchy. The kit comes outfitted with Evans heads that sound great right out of the box with correct tuning.

Also included with the Tama Cocktail Jam Mini is all of the mounting hardware, including a bass drum pedal, two cymbal mounts, and tom mounts. The kit also includes durable and padded gig bags to transport the kit between gigs and rehearsals.

This kit is designed to be played sitting down. Once everything is set up, it’s far too short to be played standing up. However, you can modify this kit so that you can play it while standing upright.

All you need is the inner tubes from regular cymbal stands, and you can replace the straight mounting rods that connect the bass drum to the floor tom with these. This will significantly increase the height so that you can play it while standing up.

I hope you have enjoyed reading this information on cocktail kit drums and that you have found it useful. If you have ever felt inspired to play a cocktail drum set, I’d recommend giving it a try!

They are super enjoyable to play and convenient for gigs and jam sessions alike.

Ready to level up your drumming?