It’s no secret that I’m a huge fan of Drumeo. It’s my top recommended drumming educational platform, designed to motivate and help you improve on the drums, with engaging video lessons and a whole load of other awesome content.

With the Edge membership, there is an awesome section called Coaches. Drumeo has brought dozens of world-class drummers in to teach valuable lessons that are relevant to the fields that they specialize in.

For example, Greyson Nekrutman is a fantastic jazz drummer who has solidified himself in the drumming community as a young jazz great. All his lessons on the Coaches page involve jazz drumming of some sort.

The lessons are responsive and engaging, you even have the opportunity to ask questions and obtain world-class input from the very best.

Dennis Chambers is one of the latest additions to the Coaches’ roster. A hall of fame drummer with decades of industry experience, it is incredible that Drumeo has linked up with him to share his expertise.

Let’s take a deeper dive into Dennis Chambers and his involvement with Drumeo!

Drumeo is the largest drumming platform out there, and they are able to get some of the best drummers into their studios to film lessons. Dennis Chambers filmed lessons with the Drumeo team a few years ago, and those lessons saw major success on YouTube thanks to Dennis’ popularity.

He’s an incredible drummer and is often referred to as one of the top players in the world. The Internet knows Dennis Chambers for his speed and power, with countless clips being shared around of him blazing around the kit.

His specialty is being a solid musician, though. He’s mostly performed with funk and jazz fusion groups over his career with groups such as Parliament-Funkadelic, the John Scofield band, and the Becker Brothers.

He’s hands-down one of the best when it comes to solid time-keeping, musicality, and groove.

While Dennis is a world-class musician, most of his lessons on Drumeo apply to players of all levels. Whether you’re a beginner or advanced drummer, his advice on being a good musician is something everyone needs to hear.

One of Dennis Chambers’ most recent impressive drumming feats is this video right here, where he plays drums to Schism by Tool. Tool is a progressive rock band, and Schism is a song that has multiple different parts with varying time signatures.

The idea here was that Dennis would listen to the track once and then play along to it. The twist is that he didn’t hear any of the original drum parts. So, he had to create his own drum part from scratch.

Firstly, this isn’t an easy song to learn, even if you have weeks. With only one listen, Dennis Chambers was able to do what Dennis Chambers has always done, and he nailed it! It’s cool to hear him add a funk drumming spin on a song that’s quite out of his comfort zone.

He also gives some valuable insights into his listening process, explaining how important it is to listen to a song before adding drums to it. It’s amazing to see him be vulnerable with a song, as most drummers who’ve seen Dennis play only see the finished touches.

With that being said, his first performance through the track is one many of us would dream of playing. Dennis explains that progressive music like this would be right up his alley in his younger days, so it’s interesting to see how he gives a more mature and laidback performance here.

Dennis Chambers has recently taken a more active role with lessons on Drumeo. He’s one of the Coaches, meaning that lessons from him are uploaded regularly on the platform.

The biggest piece of content to follow is a course on funk drumming. Dennis Chambers is a funk drumming legend, and he shares several useful tips and tricks in the course. He also breaks down a few grooves and fills that he’s quite well-known for.

In the Funk Mastery course, Dennis teaches you how to approach funk drumming from a musical point of view. It’s more important to be a musician than it is to be a drummer, and he emphasizes that to help you understand the best way to create drum parts.

He also gets into some practical demonstrations of how to create drum fills, use syncopation, play solos, and come up with funky grooves.

If you want to improve your groove, running through Dennis Chambers’ Funk Drumming course on Drumeo Edge is a fantastic way to do so.

The Coaches program doesn’t just stop at Dennis Chambers’ course, though. The amazing thing about Drumeo is that you get to interact with all the drum legends that they bring onto the platform.

At the time of the funk drumming course being uploaded, it was wrapped up with a Live Q&A from Dennis that was facilitated by Brandon Toews. When watching that video, you get to see Dennis casually answering dozens of questions that aspiring drummers have been itching to ask.

It’s quite common for Drumeo Coaches to do these Live Q&As regularly, making it the best way of directly interacting with your favorite drummers and asking them questions.

Apart from the course and once-off lessons, there are a few performance videos of Dennis Chambers on the Drumeo platform. It’s great to watch these as you get a dedicated drum view of Dennis playing some of his most iconic drum parts.

As always with Drumeo, the video and audio quality of these performances is incredible, with multiple camera angles to see everything that Dennis is playing.

The most interesting performance video is the one of “Blue Matter” by John Scofield, which even has notation included for two of the grooves that Dennis plays within the track. 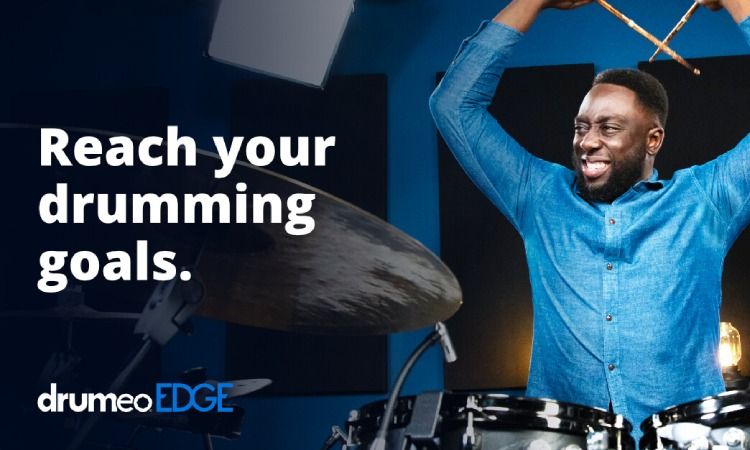 If you’re interested in what the Drumeo Edge platform offers, you can sign up for a free trial. In this trial, you’ll get full access to everything on there, and you’ll be able to decide if signing up officially is the next step in your learning journey.

There are thousands of lessons on there, and the Drumeo team is constantly uploading new ones every week. You also get access to hundreds of play-along tracks, drum transcriptions of popular songs, and a large community of drummers that are open to giving advice and sharing your drumming journey with you.

While Dennis Chambers is an incredible drummer and inspiration, his lessons only form a small fraction of what Drumeo offers. The platform has grown tremendously over the years, and bringing in world-famous drummers to do lessons is one of the pinnacle features of the brand’s growth.

There are so many free Drumeo lessons that you can watch on YouTube, but the real value comes in the form of their Drumeo Edge membership. That’s where you’ll be able to study under Dennis Chambers and all the other top-quality Drumeo Coaches.